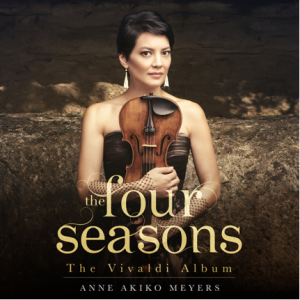 Try getting through your daily routine without running into Antonio Vivaldi’s Four Seasons. You would be hard-pressed to enter a five-star restaurant or luxury retail store without “Spring” playing in the Muzak. In a world saturated with the Four Seasons, Anne Akiko Meyers has released her take on this iconic piece.

The Four Seasons, composed in 1723, may enjoy universal appeal today, but it was only revived in the 1920s. Its popularity gained momentum as the first recordings came out in the 1950s and as the period instrument movement started to gain hold in the late 1960s, bringing about newfound appreciation for Baroque music.

When that rebel of the classical music world, Nigel Kennedy, released his album of the Four Seasons in 1989, it sold 2 million copies worldwide. Gil Shaham made a music video of “Winter” that aired on The Weather Channel. Today, the Four Seasons has not only become standard repertoire in concert halls, but it has also become an icon of classical music as much as the opera singer in a breastplate.

That kind of popularity has led the Four Seasons to be performed in all manner of musical styles, from the traditional performances by Pinchas Zukerman, to Fabio Biondi’s wild period instrument performances that almost render it unrecognizable as the Four Seasons, and to the techno version on an electric violin performed by the violinist and Sochi Olympian Vanessa Mae.

So where does Meyers’ recording on the eOne label fit in among the 1,448 “Vivaldi Four Seasons” search results in Amazon.com?

Meyers and the venerable English Chamber Orchestra conducted by David Lockington give performances that are decidedly traditional in the spectrum of Four Seasons performances. But within those confines, they exploit the imaginative possibilities of the piece, accentuating the virtuosic passages with percussive effects and the lyrical moments with pastoral tranquility.

If Meyers’ prior album, Seasons…dreams…, was intended to help the listener relax, the Vivaldi album is a wake-up call. In “Summer,” Meyers doesn’t so much describe the coming of the storm, as depicted in the sonnets accompanying each season, but summon it by stirring turbulent winds with fiercely rapid cross-stringed tremolos. In “Winter,” Meyers plays the biting spiccatos in a way that makes you feel “teeth chattering in the bitter chill,” as described in the poem.

Meyers has a full-bodied tone that shines in the slower movements. Her performance of the Largo from “Winter” provides all the warmth and comfort of hot chocolate and marshmallows by the fireplace on a blizzard-stricken night. Meyers often plays with a slowly oscillating vibrato that has a gentle calming effect, and it is particularly effective in “Spring,” where the poem describes a meadow filled with a herd of sleeping goats.

Overall, the listener could wish for more warmth in the recorded sound and more spontaneity in the performance. Still, Meyers’ collaboration with David Lockington and the English Chamber Orchestra yields a performance that is on the point, but richly detailed, and with plenty of gusto.

Two pieces round out this CD. Arvo Pärt’s Passacaglia, composed in 2003, opens in a mystical and haunting sonic landscape laid by the orchestra. Meyers plays short bursts of chords that flicker and spark, until the music develops into a sustained gypsy-like dance. Vivaldi’s Concerto in F major for Three Violins is performed with youthful exuberance.

For collectors that already own any of the numerous, superb Four Seasons albums out in the marketplace, there may not be a compelling reason to add Meyers’ album to their library. Violin aficionados may wish to acquire the album just to hear the “Vieuxtemps” Guarneri del Gesù, a violin with an illustrious history. For those classical music virgins whose ears were seduced by Vivaldi’s Four Seasons in a concert hall, a restaurant or any number of places, Meyers’ album is the perfect entry point into the rich world of classical music.