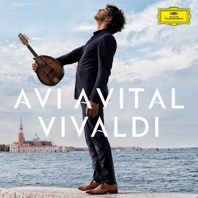 Avi Avital's "Vivaldi" is his third recording with Deutsche Grammophon. He was the first mandolinist signed to DG.

You’ve got to admire the chutzpah of a guy who decides to stake his entire musical career on the mandolin. Avi Avital is a 37-year-old Israeli who has been studying his chosen instrument since the age of 8. His focus has been on contemporary classical and Baroque repertoire, as well as some excursions into Klezmer. In the process, he has earned international recognition for his playing as well as a 2010 Grammy nomination for his recording of Avner Dorman’s Mandolin Concerto.

There actually is a classical mandolin repertoire, and, for Avital, Vivaldi’s mandolin concerti represent the instrument’s “Old Testament.” For “Vivaldi,” Avital explores a number of these early compositions written specifically for his instrument. Joining him on the recording from Deutsche Grammophon is the Venice Baroque Orchestra, a talented group well versed in all things Vivaldi.

The centerpiece of “Vivaldi” is the Mandolin Concerto in C Major, written in 1725. Avital’s playing is without fault, and he moves easily from somber largo tempi to lively allegros with long runs of 16th notes. Another composition sure to be familiar to Vivaldi aficionados is “Summer” from “The Four Seasons,” originally composed for violin. His emotionally dynamic interpretation provides a refreshing new reference for this iconic work.

It should be noted that, for the Vivaldi material, Avital plays a modern mandolin, which puts a more contemporary spin on the sound of the instrument versus an original instrument. However, Avital trades in his usual ax for an antique mandolino lombardo for the recording’s endcap, a traditional Venetian gondolier’s song, “La biondina in gondoleta.” For this he is joined by the great tenor Juan Diego Flórez as well as by colleagues on lute, baroque guitar, harpsichord and cello. To me, this is the highlight of the set. If you close your eyes, you can almost smell the saltwater and hear the lapping of little waves as your gondolier sings emotionally of a lost love, while the tower of San Marco recedes in the distance. Good stuff.