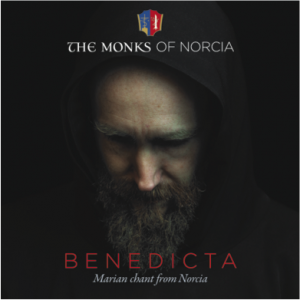 Harken back to 1994: one of the biggest-selling recordings of that year was Chant by the Benedictine monks of Santo Domingo de Silos. Thanks in part to the enigmatic Magritte-like cover art and clever marketing, that recording ultimately sold over 6 million copies. Now, 21 years later, another order of Benedictines has thrown down the gauntlet with its own recording of Gregorian chant. Benedicta: Marian Chant From Norcia is the debut recording of the monks of Norcia, and it is an exemplary and worthy successor in every way. Indeed, it seems possible that lighting strikes twice: Benedicta debuted at No. 1 on the Billboard Classical chart and bested pop, rap and country superstars as the No. 1 bestseller at Barnes&Noble.com, No. 2 bestseller on Amazon and Top 40 on iTunes.

Norcia is a small town in Central Italy near the foothills of Umbria’s Sibillini Mountains and happens to be the birthplace of Saint Benedict, although most visitors today eschew the sacred for the profane to indulge in its gustatory delights, including wild boar, truffles and pecorino cheese. Monks lived here beginning in the 10th century, but they were driven out in 1810 by Napoleon’s forces and the monastery was abandoned until 1998 when a group led by Fr. Cassian Folsom was granted the right to resettle the monastery. The group has been slow to grow — at last count there were only 18 fully vested members — but they have been actively seeking out ways to interact with the outside world — “the new evangelization” as some call it.  One way of reaching out was to open a brewery — the monks produce a respected brown and a pale ale; the other was to produce the music found in Benedictus.

Fr. Cassian happens to be an American with a music degree from Indiana University. Perhaps not coincidentally, more than half the monks at Norcia are also American, the remainder being a diverse assortment of men from all over. They are young — their average age is 33 — and completely dedicated to the spiritual life. And nothing better reflects their devotion to prayer and meditation than these evocative chants.

The 33 tracks begin with the ringing of the bells of the monastery and footfalls of the monks taking their places. Nice touch. The chants themselves are Marian chants — all dedicated to the life of Mary, the blessed virgin. With the exception of one piece the monks themselves wrote, these sacred songs have been sung over centuries and centuries. These are essentially prayers set to music and are used in the Catholic Mass as well as for the canonical hours. The musical theory behind Gregorian chant is complex, but generally speaking, much of it takes the form of call and response or alternating solos and choirs called responsaries and antiphons.

But there is no need to understand the modes, scales, words or even the liturgical uses for which they are purposed to enjoy this music. There is something ancient — almost primeval — and mystical in its simplicity and purity. It is both pleasing to the ears in its diatonic scaling and satisfying to the spirit.  Many will find this music a useful accompaniment for prayer, meditation and clearing of the mind. Others will appreciate its soothing and calming effect. Put it on while driving through LA traffic and see how it can improve your commute!

The recording quality is excellent. It was recorded on site in the Norcia basilica, which must be quite large: With finely resolving playback equipment, you will be able to hear that the reverberations take no less than five seconds to dissipate. There is no information in the CD liner notes other than the Latin name of the chant and the type of chant. All the more reason to cue it up, sit back and reflect on the monks’ motto as you listen: Ut Laetificet Cor — let the heart be gladdened.