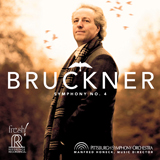 Honeck and the PSO's Bruckner 4 / Image courtesy of Reference Recordings

The latest in the “Pittsburgh Live!” series from Reference Recordings is a jaw-dropping performance of Anton Bruckner’s Symphony No. 4 in E-flat major (“Romantic”) that is engrossing and thrilling.

In this recording, Pittsburgh Symphony Music Director Manfred Honeck takes seriously Bruckner’s own program as a secular symphony about nature—hence the subtitle, “Romantic”—which Honeck contrasts primarily with Bruckner’s last three great symphonies evoking the composer’s religiosity. But even in this symphony, there are sections, especially for winds and brass choirs, sometimes alone and sometimes as accompaniment for the strings, which sound like the organ that Bruckner played.

As with the other recordings by Honeck and the PSO in this series (see Culture Spot’s reviews of Strauss and Dvořák), Honeck wrote extensive liner notes detailing how and why he interpreted the work the way he did, sometimes even including the bars and the time in case a listener doesn’t have the score.

Few modern conductors have approached music the way Honeck does, and his Bruckner Fourth is no exception. In all of his recordings, Honeck takes risks. He doesn’t just play what is written on the page, but rather interprets the music the way he thinks the composer would want it played, all the while considering the historical and personal context in which the piece was written. In the case of Bruckner’s Fourth, Honeck considers that it was written at a time “that was absorbed with nature and the past,” and this symphony in particular “refers to the nature found in German-Austrian landscapes and its myths.” Thus, he believes that a “rigorous fidelity to the score . . . runs the risk of losing the tradition in which the piece was born….”

As Honeck himself admits, he takes liberties with the music to achieve the overall musical impression. For example, the symphony famously opens with a plaintive horn solo laid over very quiet shimmering strings, in Bruckner’s words, “Dawn in a medieval city. From the city’s turrets, awakening calls.” Honeck and the PSO take us to this medieval city and awaken us softly and faintly with a horn from somewhere far away.

Honeck writes about the opening: “Here begins the creativity of the conductor and the musicians.” Then, for the remainder of the more than 65-minute performance, Honeck contrasts the very quiet with the very loud while slowing down certain sections for greater dramatic effect.

Honeck writes that, “One can only imagine the portrait Bruckner continued to draw in his mind!” And so Honeck and the musicians of the PSO beautifully imagine the portrait of Bruckner’s Fourth Symphony and achieve something even more glorious than what is written on the pages of the score. The result is a compelling, intriguing and truly romantic version of this great symphony.