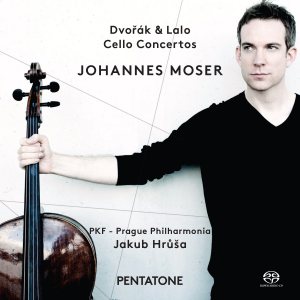 The recent recording of two 19th-century cello concertos — the Cello Concerto in B minor, Op. 104 by Antonín Dvořák and the Cello Concerto in D minor by the French composer Édouard Lalo — performed by German-Canadian cellist Johannes Moser accompanied by the Prague Philharmonic led by the young Czech conductor Jakub Hrůša, is an outstanding addition to the PENTATONE catalogue.

With a few notable exceptions (e.g., Haydn’s two wonderful cello concertos), there were very few concertos for the cello composed between those by Vivaldi and the concertos in the mid- to latter part of the 19th century by Schumann (1850) and Saint-Saëns (1872), culminating with Dvořák’s 1895 masterpiece. However, sandwiched in between the Saint-Saëns and the Dvořák were the Variations on a Rococo Theme by Tchaikovsky (not technically a cello concerto) and the cello concerto by Lalo (1876).

That Moser and Hrůša decided to record the Dvořák is not a surprise — it is the consummate challenge for any cellist. And the PENTATONE recording is equal to the best of them. Moser gives a strong, heartfelt performance with a responsive accompaniment by Hrůša. Moser plays with sentimentality without being maudlin, while combining strength and sensitivity.

What may be surprising to some is the inclusion of the Lalo, that is, until one listens to it. It is a mystery that this concerto isn’t better known and played more often. It is a fine concerto in the style of the concerto by Saint-Saëns.

Moser and Hrůša bring out the urgency and drama of the first movement and the contrasting sentimentality of the second movement with its light and airy scherzo. The third, and weakest, of the three movements, is still wonderful. The Lalo may not have the stature of the Dvořák, or even of the Saint-Saëns, but it is nevertheless a great 19th-century concerto and we should be grateful to PENTATONE for this recording.

Moser and Hrůša have combined for a memorable rendition of the Lalo and a fresh and exciting reading of the Dvořák.