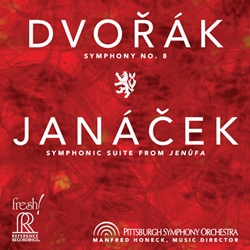 These days, American symphony orchestras are looking for young and exciting music directors who can breathe new life into what has become a staid art form that mostly appeals to septua- and octogenarian audiences. In 2009, the LA Phil accomplished this with a lot of fanfare by hiring perhaps the most sought-after young conductor in decades, Gustavo Dudamel. That same year, the New York Phil landed Alan Gilbert. In 2008, with much less fanfare, the Pittsburgh Symphony Orchestra acquired the dynamic Austrian conductor Manfred Honeck, and recently renewed his contract through 2020.

The second release in the “Pittsburgh Live!” series features two works by Czech composers, the Symphony No. 8, Op. 88 in G Major, by Dvořák, and Honeck’s original version of the Czech composer Tomáš Ille’s arrangement of the Symphonic Suite from the three-act opera “Jenůfa” by Leoš Janáček.

Anyone who is familiar with the Dvořák G major symphony will find Honeck’s interpretation remarkable. Like his interpretations of the Strauss tone poems, Honeck takes great liberties with the tempo and dynamics in order to realize his vision. For example, in two instances where the flute appears to imitate the call of a bird, Honeck states in the disc’s liner notes that “it should not be played simply as written . . . but how a bird might sing,” in other words with “rubato and freedom.” He also believes that “Czech history and tradition” and “the typical Czech manner of playing,” the latter of which includes having “a little bit of fun in the music,” should be taken into account. The result is a fresh and exciting version of Dvořák’s eighth symphony that is more romantically realized than Dvořák intended.

The Symphonic Suite from “Jenůfa” is a rarely heard work by the Czech master as conceptualized by Honeck. It is beautifully orchestrated, exquisitely played and very evocative of the main themes of the opera.

The performances on this recording show why the PSO is still one of America’s premier orchestras and why a conductor of Honeck’s stature was drawn to its podium.

Finally, something must be said about the recording itself. This disc, along with the first one in the “Pittsburgh Live!” series, was recorded in multi-channel hybrid SACD sound and brings the thrill and excitement of the live performance into the listener’s own home. The combination of a thrilling performance by a world-class orchestra and conductor with the sonic brilliance of the recording sets a new standard for classical CDs.

The disc will be available July 8. For more information, visit www.ReferenceRecordings.com.