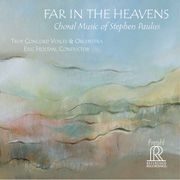 In one of life’s bitter ironies, American composer Stephen Paulus suffered a major stroke just six weeks after completing recording this album of elegiac choral works. He never recovered, and after being in a coma for over a year, passed away in October 2014. Far in the Heavens, a mix of recently composed and previously unrecorded works published by Reference Recordings, is a fitting bookend for an exceptionally talented composer who deserves to be better known.

Paulus, born in 1949, was a prolific composer with over 500 works that are represented on more than 50 recordings. While perhaps best known for his operas (his best known being 1982’s The Postman Always Rings Twice), Paulus also wrote for orchestra, chamber ensembles, keyboard, solo voice and chorus. It is the latter that we hear in Far in the Heavens.

More than half the recording is devoted to Prayers and Remembrances, a seven-part work written for the 10th anniversary of the 9/11 tragedy. Its premiere took place on 8/11/2011 in Centennial Hall at the University of Arizona in Tucson. It was commissioned and performed by the True Concord Voices & Orchestra, based in Tucson and conducted by Eric Holtan. It is this same talented group we hear on the recording.

Knowing that the work would be paired with Mozart’s Requiem at the concert, Paulus wrote Prayers & Remembrances for a large orchestra and chorus, adding flute, oboe, horn, harp and percussion. Seeking to honor those lost and to ease the grief of those whose loved ones had perished, Paulus chose a combination of poems both secular and sacred to set to music. Themes are not so much religious as spiritual, touching on the departure of souls, the search for peace and serenity, the assurance of God’s love, the beauty of the world and of those who have passed through it.

While there are some melancholic moods evoked, ultimately one’s spirit is elevated upon hearing these lovely pieces. Overall, they are harmonious, if not melodic, works, and there is little dissonance to be heard. Paulus layers the 32-voice chorus densely, altering diatonic scales to add 6ths, 9ths, 11ths and 13ths, sometimes one atop the other for a complex yet lush sound. If you like the requiems of Duruflé or John Rutter, you will like Paulus. He uses the orchestra to good effect punctuating the poems with bursts of horn or thunderous percussion and tympani when appropriate.

The other five works are thematically linked to the allegorical themes noted above. Most are a cappella and offer a chance to concentrate more on the angelic voices of the True Concord ensemble. As usual from the folks at Reference Recordings, the recording quality is top notch, revealing masses of textural detail along with huge dynamic impact. The result is an emotionally and spiritually evocative experience that has the power not only to assuage grief, but to uplift the soul.

‘Far in the Heavens: Choral Music by Stephen Paulus’ is available from Reference Recordings: www.referencerecordings.com.