CD Review: ‘Home Is a Harbor’ by Mark Abel 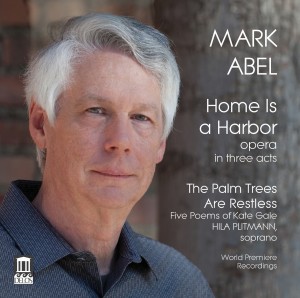 Mark Abel's "Home Is a Harbor" is available on the Delos label.

“Art music” is a coded phrase for music that most people would consider strange, offbeat or eccentric. Mark Abel’s first opera, Home Is a Harbor is all those things, but in a good way, mostly. This California-based composer has a unique sound that blends many influences and musical genres and offers an inventive vision of what a modern opera can be.

Abel has presented his vocal art music on two previous Delos releases, The Dream Gallery and Terrain of the Heart, but this is his most fully realized work. And he’s come the long way ’round to wind up here. As a young man, Abel was a rock musician. That led to a period of immersion in jazz improvisation, before putting music to the side as he pursued a career in journalism. Finally, the muse called him back to create a new kind of music that combines all of these previous influences, draped upon a classical framework.

As both composer and librettist, Abel offers a highly personal vision of the things that matter most to him. In music and words, he provides a map of sorts that lays out both the dysfunctional externalities of Modern American urban life as well as the internal struggle to transcend those harsh realities to find beauty and meaning. Home Is a Harbor begins and ends in Morro Bay, a place of sanctity and calm that, not coincidentally, happens to be close to Abel’s home in Central California.

The story takes place between the years 2005 and 2011 and involves twin sisters who are on the verge of adulthood. Lisa (sung by Jamie Chamberlin) is a painter leaving home to attend NYU. In New York, she soon finds commercial success with her seascapes, but also is disheartened by the shallowness of trend followers and by the pressures put upon her to keep the dollars rolling in. Laurie (sung by Ariel Pisturino) is “a people person” and goes to a small local college before being bamboozled to sell reverse mortgages under the guise of helping people, until the 2007 housing collapse opens her eyes to the true nature of her job. Both women return to Morro Bay at the end, committed to helping those who are hurting most.

It’s amusing — not to mention somewhat jarring — to hear modern argot sung, sometimes spoken, in an opera. And there’s plenty of it here: the libretto is sprinkled with phrases like “chill out,” “what’s up?,” “go with the flow,” “get a grip,” etc., as well as a liberal smattering of proper nouns like Prius, The O.C. and even Rudy Giuliani that indicate place and time. Such words, intoned with the rounded mouth sonority of opera singers, just sound odd.

The two female leads are competent, but sound quite similar and without following the libretto, it can get confusing as to who is who. Additionally, Abel has his sopranos making frequent vocal leaps of an octave or more from one note to the next, which after a while felt a bit random and ultimately annoying. I thought the male singers, especially baritone Babatunde Akinboboye (who sings the role of Lance, Laurie’s boyfriend), were overall more compelling and made a better account of themselves.

Of course, as in any opera, the music is the ne plus ultra — the foundation upon which everything else rests. Happily, Abel presents a panoply of sounds, moods, textures and ideas that make listening to this well-recorded disc worthwhile. He brings an organ into the mix, from which he variously coaxes church sounds and rock sounds or mirrors the double bass. There are moments of humor as well, such as when Lisa visits a club and encounters a snatch of Madonna-like synth pop while waiting to hear a comically bad female singer known as The Yowler. The orchestra, La Brea Sinfonietta conducted by Benjamin Makino, features primarily woodwinds, some horns, as well as three percussionists. Notably, there are no violins used at all.

As a bonus on disc two, Abel has set to music five poems of Los Angeles-based poet Kate Gale. It is simply piano (Tali Tadmor) and voice (soprano Hila Plitmann) and overall conforms most closely to what most people would consider “art music.” Most of the poems are pretty dark, expressing a bleak landscape of bitter, scarred women ruminating on loss, perfidy and meaninglessness. Worth a listen, haunted but not haunting.

Let us hope that Abel finds a way to get this opera produced in Los Angeles, because with the right director it could be a terrific show. But that might mean Abel leaving his beloved Central Coast to rough it for a while in big, bad L.A. Hey, c’mon down, Mark! It’s not as bad as you might think here.

Home Is a Harbor is available on the Delos label: https://delosmusic.com/mark-abels-home-is-a-harbor-is-enlightening/. Video link: https://youtu.be/hLkqhIgmnCA