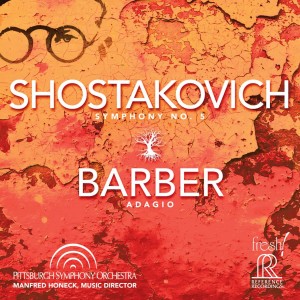 Manfred Honeck and the Pittsburgh Symphony Orchestra continue their Pittsburgh Live! series with another astounding performance of two more popular works: the Symphony No. 5 in D minor, Op. 47 by Dimitri Shostakovich and the Adagio for Strings by Samuel Barber. But as they have done with other popular works he and the PSO have released on Reference Recordings (search “Honeck” on Culturespotla.com for our past reviews), Honeck puts a fresh face on them by infusing them with his own interpretations of the music based on the facts of the composers lives in a historical context.

The historical context of Shostakovich’s Symphony No. 5 was the oppressive regime of Stalin in which the composer saw several of his fellow artists exiled to Siberia for producing works of art that Stalin found objectionable. Shostakovich’s fifth symphony was composed to placate the authorities. Rather than interpret the symphony in political terms, however, Honeck opts to interpret it in terms of Shostakovich’s inner life.

Thus, Honeck finds Shostakovich’s “rage and desperation” in the first movement, loneliness and sadness in the third movement, and mocking humor in the second movement and parts of the fourth movement, which he conveys in a powerful way to the listener. With Honeck’s thorough understanding of the composer and the music in their historical context, his dramatic dynamic and tempo effects, and an orchestra that responds to his direction with perfection, he puts his own distinctive stamp on this oft-heard symphony and presents the listener with an interpretation that is deeply moving.

Honeck points out that Barber produced an arrangement of the Adagio for a cappella choir with text from the Agnus Dei from the Roman Catholic Mass. Because the text so “perfectly fits the music,” Honeck reasons that Barber must have known about the Agnus Dei from his days as an organist and that he actually had it in mind when he composed the Adagio as the second movement of his String Quartet No. 1.

Thus, as Honeck writes in the liner notes (which he writes for every recording), “I have allowed myself, against traditional contrapuntal interpretation, to direct the phrasing according to the nuance of the spoken text” of the Agnus Dei. The result, for want of a better term, is a religious experience for the listener, which, according to Honeck “is the key to finding a deeper sense of this piece.”

Bravo to Honeck, the PSO and Reference Recordings’ engineers for another significant contribution to the recorded archive of classical music!

For more information about this CD, visit www.ReferenceRecordings.com.