CD Review: Honeck and the PSO Perform Beethoven and Strauss 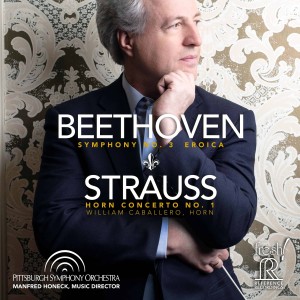 The new release in the Pittsburgh Live! series is a revelatory performance of Beethoven’s Symphony No. 3 in E-flat major, Op. 55 by Manfred Honeck and the Pittsburgh Symphony Orchestra.

It’s been a few years since we’ve heard Manfred Honeck and the PSO perform Beethoven, and that was a recording of the fifth and seventh symphonies (see our review) in 2015. On the present disc, Honeck and the PSO deliver a thrilling performance of not only one of the most powerful and compelling symphonies ever composed, but arguably the greatest symphony ever composed — Beethoven’s “Eroica.”

From its opening E-flat major blasts to the rousing coda, the first movement is a dramatic and energetic allegro in three-quarter time. The second movement — no less dramatic and compelling — is a funeral march. The third movement is a quick scherzo with a surprising trio dominated by three horns (the first time three horns were used in a symphony) and ending in a time change (also probably a first) from triple to duple time for four measures. And the finale, one of Beethoven’s several compositions based on a theme from his ballet “Prometheus” that under other guises goes by the name of “Eroica Variations,” is a tour de force of symphonic variations on the same theme. Honeck notes that it is fitting that Beethoven incorporated the Prometheus theme into a “heroic” symphony.

And what has Honeck done with this great symphony? As he does with every work he performs, he has dissected it with surgical precision to massage the dynamics, sometimes even within a single bar. And, as usual, he puts his own stamp on the symphony with some added surprises, such as toward the end of the second movement when Honeck asks the third horn to prominently play a three-note upbeat that Honeck writes in the extensive liner notes “is quite hidden in the music.” He wonders why Beethoven wrote this part independent from the rest of the instruments if he didn’t want it to be heard. This strategy reflects Honeck’s approach to every work, which is to study it in its musical and historical context and then to consider what the composer may have wanted and why.

Honeck also perfectly balances the strings and woodwinds in their constant interchange throughout the symphony. Honeck’s tempos were spot on — making it difficult to imagine that Beethoven had any other tempos in mind — and reflect Honeck’s view of each of the movements as dance movements. (In fact, couldn’t one make this claim about all of Beethoven’s symphonies?) I dare anyone to listen to this recording and not feel compelled to move with the music. Each movement builds momentum to glorious conclusions. There are also many little touches that one can appreciate, such as the repeat in the first movement and the almost immediate transition from the third to the fourth movements.

As with Honeck and the PSO’s interpretations of other great symphonies in the Pittsburgh Live! series, this recording of Beethoven’s “Eroica” symphony is a must for any serious connoisseur and collector.

The second piece on the disc is the Horn Concerto No. 1 in E-flat major, Op. 11 by Richard Strauss. The horn solo is played to perfection by the principal horn of the PSO, William Caballero, who also opined about the work in an interview with Honeck in the liner notes. In the concerto, Honeck defers to Caballero who moves seamlessly from smooth piano playing to powerful forte playing. When listening to the disc, my suggestion is to listen to the Strauss first (as that is how it might be programmed in a concert), and then the Beethoven, because once the final E-flat chord of the Beethoven is played, the listener will be exhausted and spent and can only sit in awe of one of the masterpieces of Western music played magnificently by Honeck and the PSO.

As with the other Pittsburgh Live! series recordings by Honeck and the PSO, this one sounds fantastic! They’re not kidding when they call it Live! because the sound jumps out at you as if you were sitting right in front of the orchestra in Heinz Hall in Pittsburgh, where it was recorded. This recording is a tour de force and stands among the great sound recordings of Beethoven’s monumental symphony.

This CD will be released Sept. 21, 2018. For more information, visit https://referencerecordings.com.