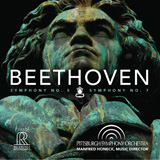 Honeck and the PSO perform Beethoven's fifth and seventh symphonies.

Manfred Honeck and the Pittsburgh Symphony Orchestra have done it again. They have produced fresh and exciting performances of two of Beethoven’s greatest symphonies, the Symphony No. 5 in C minor, Op. 67 and the Symphony No. 7 in A major, Op. 92, in their fourth CD in the Pittsburgh Live! series on the Fresh! series from Reference Recordings. It wouldn’t be inappropriate to ask whether we really need another recording of Beethoven’s fifth or even his seventh symphony, but when it’s Manfred Honeck and the PSO, the answer is a resounding yes.

Honeck’s fifth is fresh right out of the gate, beginning with the way he plays the first four fateful notes. As he indicates in the liner notes, “The use of the more deliberate tempo gives the opening bars a grandiose weight, power and vehemence. For me, it was essential to capture the greatest possible drama with this famous first statement so as to depict the heroic character of the movement.” And Honeck does, even slowing them down for maximum emphasis in the coda.

And Honeck’s interpretation of the seventh is muscular even in the slow movement. While the tempo of the finale is faster than most, it doesn’t seem rushed, even though at times it seems as if Honeck might lose the orchestra. But he doesn’t. And then he speeds up the coda to a rushing and rousing conclusion.

As always, Honeck takes liberties with the tempos and dynamics, but these aren’t frivolous liberties. Rather, they are grounded in empirical research. So not only do we get to hear these exciting performances, but we get to read how Honeck approached interpreting them because, as usual, he wrote the liner notes explaining in detail not only the historical context of the works, but also specifically what he had the orchestra do, sometimes bar by bar.

In considering how to interpret each symphony, Honeck posed these questions: 1) What was Beethoven’s will, and what are the peculiarities of the piece? 2) “Under what circumstances was it composed?” 3) What was new when Beethoven composed the piece? 4) “What should happen in a particular way?” and 4) “Is it possible to find something revelatory?”

Honeck not only asks the questions, but he answers them, and his answers are revealed not only in his words, but, more importantly, in his interpretations. Now, I m sure most conductors spend a lot of time thinking about how they should approach a particular composition, but Honeck lets us in on his secrets, some of which are obvious when we listen to the performance.

Honeck’s interpretations are always original and exciting, and his Beethoven is no exception. And let’s not forget the extraordinary playing by the PSO, without which Honeck’s vision would not be realizable. Moreover, as usual, the sound produced by Soundmirror is stunning, and really puts the “Live!” in Pittsburgh Live!

Even if you own several versions of Beethoven’s fifth and seventh, you should add this PSO disc to your collection.

For more information about this CD, visit www.ReferenceRecordings.com.