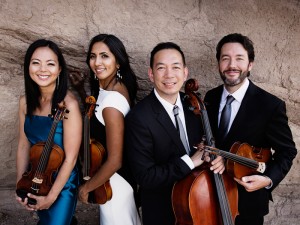 Since its inception in 2008, the Los Angeles-based Lyris Quartet — Alyssa Park (violin), Shalini Vijayan (violin), Luke Maurer (viola) and Timothy Loo (cello) — has championed music by contemporary composers. As the founding resident ensemble of the Hear Now Music Festival, which focuses on the music of living Los Angeles composers, the quartet has collaborated with and premiered works by Stephen Hartke, Don Davis, Arturo Cardélus, Veronika Krausas and others.

On this Ars Produktion disc, the quartet performs the piece that they first performed in public, the String Quartet No. 2, “Intimate Letters,” by Leoš Janáček, as well as four works by composers who were asked to compose pieces in response to Janáček’s quartet. These include Intimate Voices by Peter Knell, Fancies by Bruce Broughton, Unrequited by Billy Childs and Inside Voice by Kurt Rohde.

Janáček’s self-named subtitle, “Intimate Letters,” refers to the more than 700 letters he exchanged with Kamila Stösslová, a married woman 38 years his junior with whom Janáček was obsessed and toward whom he directed his unrequited love. He described his String Quartet No. 2 as follows: “You stand behind every note, you, living, forceful, loving. The fragrance of your body, the glow of your kisses — no, really of mine. Those notes of mine kiss all of you. They call for you passionately….”

The performance of the Janáček by the Lyris embodies Janáček’s words. It is as if the musicians have put themselves in Janáček’s shoes and felt the love that he felt for Stösslová. The playing is sublime and heartfelt. This performance personifies the intimacy intended by the composer. It’s really a window into his heart and soul.

The other pieces on the disc — each about 10 minutes long — allude to some aspect of the Janáček. Each composer, however, takes a very different approach, using Janáček’s quartet as a springboard for his own ideas. Though inspired by Janáček’s quartet and unrequited love for Stösslová, each one of the additional pieces on this disc stands on its own.

Rohde’s Inside Voice begins with an urgency before becoming more sedate. Child’s Unrequited is more tonal than the other pieces and sounds the most like it was inspired by Janáček’s “Intimate Letters.” It exudes an air of sadness with a high, wailing first violin giving way to spurts of doubt and, possibly, regret. Knell’s Intimate Voices is perhaps the most intimate; the entire piece is played sotto voce with a very brief crescendo near the end before returning to a whisper of strings. The disc ends on an upbeat note with Broughton’s Fancies, inspired by Janáček’s fancying of Stösslová, although Janáček’s feelings were probably more sentimental than this piece suggests.

The Lyris Quartet is equally at home with the more classical quartet by Janáček and the contemporary works and plays them all with confidence and conviction. This disc is highly recommended for anyone who is a fan of outstanding string quartet playing.

For more information about the Lyris Quartet and “Intimate Letters,” visit http://www.lyrisquartet.com.