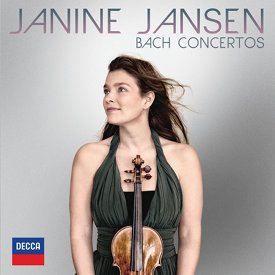 A new recording from Decca offers chamber music renderings of Bach concertos and sonatas for violin.

Bach is primarily known for his compositions for keyboard instruments. With a few notable exceptions (the sonatas and partitas for unaccompanied violin), he is less well known as a composer of works for violin. Thus, this Decca album of Bach concertos, featuring the violin concertos and sonatas for violin and harpsichord, performed by Janine Jansen and fellow musicians is a welcome addition to the Bach catalogue.

The disc is unique in a number of respects. First, Jansen both performs and conducts the concertos. Second, she is accompanied in the concertos by a small ensemble of 12 musicians, including her father on harpsichord, her brother on cello and other close friends and colleagues. The result is a much more intimate performance that probably more closely reflects the size of the ensemble for which Bach originally wrote these works. These performances are replete with nuances that would be difficult to achieve with a larger group of musicians.

Another unique feature is that, unlike performances of violin concertos post-Bach where the soloist is featured prominently, here Jansen is just one of the violinists, despite playing a violin made during Bach’s lifetime (a 1727 Stradivarius). And even though her part stands out, it is neatly woven in with the other instruments.

Jansen and her family and friends give us a version of Bach works for violin rarely heard nowadays. The pieces are exquisitely rendered, and Jansen’s playing is superb. Jansen’s performance is Bach for purists, but it possesses a surprising freshness. If you are a Bach enthusiast — or even if you’re not that familiar with his works for violin — this disc is a must for your collection.

For more information on Janine Jansen and her Bach album, visit: http://www.janinejansen.com/index.htm.