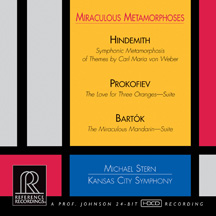 When one thinks of great American orchestras, the New York and Los Angeles Philharmonics, and the Boston, Chicago and Cleveland Symphony orchestras come to mind. Even the St. Louis, San Francisco and Dallas Symphony orchestras may be mentioned. But the Kansas City Symphony?

A recent CD on Reference Recordings featuring the Kansas City Symphony (KCS) conducted by Music Director Michael Stern shows they may be vying for a place among the best American orchestras.

The recording by the KCS features “three classic modern masterpieces:” the Symphonic Metamorphosis of Themes by Carl Maria von Weber by Paul Hindemith, The Love for Three Oranges-Suite by Prokofiev and The Miraculous Mandarin-Suite by Bartók.

This performance by the KCS is the fourth on Reference, but the first to be recorded in the orchestra’s new home, Helzberg Hall at the Kauffman Center for the Performing Arts in Kansas City. Reference Recordings prides itself on producing high-quality live-performance experiences, and this disc is no exception.

As with their other recordings, the music on this HDCD jumps out at the listener. It is clear and bright and captures the essence of a live performance. The KCS under the direction of Stern plays with clarity and crispness.

Apparently, the KCS has been flying under the radar. But with this new recording, it is soaring higher and could be knocking on the door of the pantheon of American orchestras.

For information on this CD, visit www.ReferenceRecordings.com.