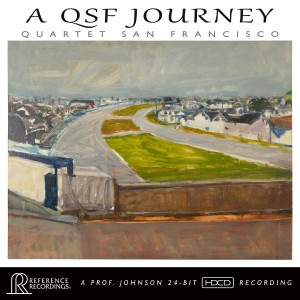 The new CD on Reference Recordings by the Quartet San Francisco (QSF), A QSF Journey, is a wonderful addition to the string quartet catalogue. The CD contains 12 tracks, many of which were either composed or arranged by the quartet’s founder and first violinist Jeremy Cohen and played to perfection by the quartet whose other members include Joseph Christianson, violin, Chad Kaltinger, viola, and Andrés Vera, cello.

The QSF plays in the tradition of other string quartets (e.g., Turtle Island Quartet and Kronos Quartet) that have tackled repertoires ranging from classical to pop, rock and jazz; but the QSF has branched out even more to include tango and bluegrass. In fact, their previous four releases have earned them no less than five Grammy nominations, and the group won the Argentine Consulate’s International Tango Competition in New York City in 2004.

A QSF Journey, the group’s first release on Reference Recordings, is a delightful and engaging mix of musical styles ranging from tango to jazz and bluegrass. Each track — with one exception — is no longer than about five minutes, just like a pop song. Thus, the album is more like a pop or rock album except that the music is performed by an accomplished set of string musicians. The playing is crisp, clear and surprisingly fun!

And there are some surprises. For example, Cohen has arranged a version of the Gershwin-Rouse “Rhapsody in Bluegrass” in which the glissando on the violin that opens the piece sounds just like the clarinet that opens Gershwin’s “Rhapsody in Blue.” But then it turns into a bluegrass extravaganza with themes from Gershwin’s masterpiece woven throughout. Other surprises include three traditional folk songs from China, Mongolia and Africa arranged by Cohen for string quartet. In addition, Cohen shows himself to be an outstanding composer in his own right with songs such as “Francini,” “La Heroína” and “Al Colón” that all have a tango-like feel.

A QSF Journey is an engaging and entertaining CD, which also sounds great, as do all Reference Recordings. It should please all lovers of string quartets.