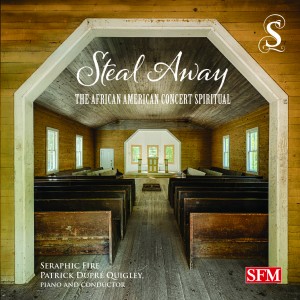 I had not heard of the choral group Seraphic Fire before, so I had no preconceptions about their new CD release Steal Away: The African American Concert Spiritual. I cued up the first track, punched play and sat back to listen. As the strains of “You Must Have That True Religion” filled the room, my first thought was, “Hmm, this sounds like a bunch of white people trying to sing black music.” Keeping in mind that the style of concert spirituals demands some degree of European musical style, it’s not an egregious transgression, like say Pat Boone singing Little Richard’s “Tutti Frutti,” but still, I was having some cognitive dissonance. You listen to black vocal groups like the Fairfield Four or the Persuasions and there is no doubt that you are listening to African American men. Looking inside the well-produced booklet accompanying the CD, there in the back is a photo of Seraphic Fire — it’s 18 white men and women.

To be fair, there are two black singers appearing on this CD, and you can hear them clearly when they do jump in on five of the 15 short tracks. Musical Director Patrick Dupré Quigley also made the choice to adopt certain Southern-isms in the pronunciation of certain words to more closely mimic the black dialect that was so much a part of this historic music (e.g., changing my to “mah”), but it doesn’t make much of a difference. It is what it is.

These considerations aside, I can actually affirm that Steal Away: The African American Concert Spiritual is a fine musical effort by one of America’s top choral ensembles. Florida-based Seraphic Fire is perhaps best known for orchestral choral music such as Monteverdi’s Vespers and Brahms’ Ein Deutsches Requiem, the latter earning them a Grammy nomination in 2012 (they earned a second nomination that year for A Seraphic Fire Christmas). Their commitment to explore under-performed music with cultural significance led them to a genre of music that holds the distinction of being the first truly American branch of classical art music.

Unlike improvisational folk spirituals, concert spirituals were written down and arranged for classically trained voices. The origin of the concert spiritual can be traced to the 1871 tour of the Fisk Jubilee Singers, a group coming out of Nashville’s Fisk College, which was established to educate the descendants of former slaves. They were extremely popular in their day, performing for U.S. Presidents and Queen Victoria.

These slave melodies melded with semi-operatic European style singing take some getting used to, but once you settle in, there is good listening here. The first 12 songs are all a cappella, written by a variety of mainly 20th-century African American composers, while the final three are traditional songs that have Quigley accompanying on piano. The songs dwell on mainly religious themes, but the feeling and emotion are the important messages.

The recording was made in the small, historic Bower Chapel in Naples, Florida. The quality is excellent, and it has just the right amount of natural reverb to maintain an intimate feel. For me, the rewards of this music come with repeated listening. The combination of joyfulness, melancholy and wistfulness that thrilled audiences in the 19th century surprisingly still packs potent evocative power for the modern listener.