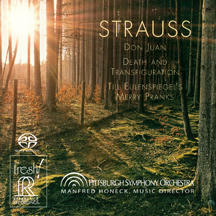 Manfred Honeck and the Pittsburgh Symphony offer up exciting and fresh interpretations of Strauss on a new Reference Recordings CD.

The first release in a new series of recordings by the Pittsburgh Symphony Orchestra led by its music director, Manfred Honeck, contains three of the most popular tone poems by Richard Strauss: Don Juan, Death and Transfiguration, and Till Eulenspiegel’s Merry Pranks. These three compositions are the earliest and shortest of the Strauss tone poems.

These works have never suffered for lack of recordings. Thus, a new recording must offer something innovative, and Honeck and the PSO certainly accomplish that.

Not only are the performances outstanding, but Honeck has really plumbed the depth of each piece for all of its power, grace and pathos, and he offers intensely personal interpretations. In fact, Honeck wrote the liner notes explaining that he took liberties with certain details in the scores in the hope of telling each story in a more exciting way. And, like it or not (we obviously did), it would be difficult to argue that Honeck’s interpretations are not exciting. Honeck stated that “the in-depth discovery and exploration of” the compositions “resulted in surprising nuances that helped to shape the overall sounds of the pieces.” Examples abound in all three works, resulting in a completely fresh view of each.

Of course, it doesn’t hurt that the PSO plays wonderfully, as one would expect from an ensemble with as storied a tradition as this orchestra. The disc, produced by a multi-channel hybrid SACD recording of a live performance in Heinz Hall for the Performing Arts in Pittsburgh, gives the impression that the orchestra is in your living room. The brass and horns almost jump out of the speakers, and the bass drum shakes the walls. Sometimes the strings seem to be overshadowed, but it’s not clear if it’s the recording or Honeck’s interpretation. But that is small potatoes compared to the overall effect.

If this disc is any indication, we eagerly await the future recordings in the PSO live series.

For information about the CD, visit www.referencerecordings.com/. For more about the Pittsburgh Symphony Orchestra, visit www.pittsburghsymphony.org. Manfred Honeck will guest conduct the LA Philharmonic Nov. 21-23; for more information or tickets, visit www.laphil.com.