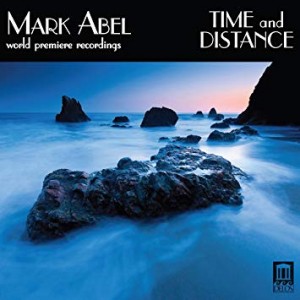 Composer Mark Abel’s 2018 DELOS CD release, Time and Distance (DE 3550), features acclaimed Los Angeles area vocalists, soprano Hila Plitmann and mezzo-soprano Janelle DeStefano. Their task was immense in this endeavor — to mediate operatic texts by Abel and area poets Joanne Regenhardt and Kate Gale that address difficult social, psychological and political issues. The collection has a unique LA sound and attitude that makes it a fine example of the creativity and currency of the local chamber music scene. Abel’s settings fuse chamber and contemporary styles seamlessly together to achieve a spacious feel with only a small ensemble. Ethereal swaths of sound contrast with minimalist passages to support flowing lyrical vocal lines. There is just enough complexity to pique the mind and attune the ear to it without overpowering the verse. In addition to Abel on percussion and organ, the ensembles include pianists Tali Tadmor and Carol Rosenberger and percussionist Bruce Carver.

Plitmann brings her exceptional talent to three works, the first of which, “Those Who Loved Medusa,” links the modern #MeToo movement and the legend of Medusa through text inspired by Los Angeles poet Kate Gale. Carver opens the piece with shimmering crotale tones to set an ancient context before the music emotes to Plitmann’s dramatic account of Medusa’s rape by Poseidon. Her voice is unsettling as she conjures the fear in the victims, who are then intimidated by deeply embedded social fears inspired by historical misogyny and abuse of women. Lines like “Carry this story forward. Rape is the fault of the victim” taunt the casual listener. Athena’s rage and her misdirected blame is palpable in the rhythmic ­­­intensity that climactically finishes with Medusa’s monstrous transformation. A plaintive Medusa attempts to move on from the crime and accept her new identity. Her agitation dissipates with the help of a magical instrument known as the rainstick, and she ended with a gentle portrayal of those who sought Medusa in exile.

Plitmann again presents an affective portrayal of lingering dissonance with three songs comprising “In the Rear View Mirror Now,” only this time from the personal perspective of one’s past. The music is upbeat and sonorous and beautifully expresses her second-guessing and bittersweet memories. Tadmor and Abel meld piano and organ to create accompaniment to Plitmann’s emotive vocals. A piano figure is counterbalanced against deep bass tones from Abel’s organ, the two interacting in a seemingly perpetual motion. “The Long Goodbye” depicts a love relationship that degenerates slowly over time, damaged by a lack of commitment. The music and text oscillate between resignation and resolve as Plitmann sings with a wonderful sensitivity and tenderness. “The World Clock” reflects on the technology boom in San Francisco as a cause of the city losing its most distinctive characteristics — its minorities, artists and intellectuals. Abel’s music deftly supports his own sentiments — dismay over the loss of the heart of the city, and as the song ends, we return to Los Angeles. The cycle’s finale, “The Nature of Friendship,” explores human attachment. Pedal-tones from the organ grind in clashing semitones to accompany Plitmann’s exposition with an illusory reference to Barbra Streisand’s “People.” Her lament over lost friends and societal troubles is moving.

Not all is bleak, however. Plitmann returns on the final track of the collection for “The Benediction,” to sing a final lamentation that resolves into a dreamy glimmer of hope for future generations. The contemporary subject is the loss of America’s natural beauty through our ineffective stewardship.

DeStefano is equally evocative with her singing of “The Invocation,” which serves as the introduction to the disc and effectively sets the overall tone. She has a rich, warm and nuanced voice that provides subtle affective interpretations of Abel’s text. Immediately, Rosenberger’s nimble piano propels the listener vicariously down life’s path, followed by a poetic retrospection realizing the dangerous seductions and close calls that one must unknowingly brush in the course of living one’s life.

“The Ocean of Forgiveness” is based on five poems of Joanne Regenhardt that appear in the collection “Soundings,” issued by Trafford Publishing, Victoria, British Columbia. DeStefano is elegant in her depiction of “Desert Wind,” and a feeling of tender remembrance manages to shine through in “Sally’s Suicide.” “In Love With the Sky” finds her expressing many shifting, fleeting moods; she is impressively versatile in her expression, and Tadmor’s touch was gentle and persuasive as well.

Bravo! A very creative collection of song with extraordinary singers and timely topics.

Time and Distance is available at Delos and Amazon.