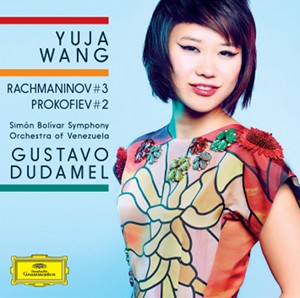 Oscar Wilde said that “youth is wasted on the young,” but don’t tell that to Yuja Wang and Gustavo Dudamel. Both have teamed up for the first time to record two of the most demanding piano concertos in the repertoire: the Piano Concerto No. 3 in D minor by Sergei Rachmaninoff and the Piano Concerto No. 2 in G minor by Sergei Prokofiev. Dudamel conducts the Simón Bolívar Symphony Orchestra (SBSO) of Venezuela (formerly the Simón Bolívar Youth Orchestra), whose members range in age from 18 to 28. You know we’re talking young when Dudamel, age 32, is the oldest musician on the record and refers to Wang, who is 26, as “very young.”

This recording from Deutsche Grammophon represents some firsts. It is the first time Dudamel and Wang have recorded together, and the first time the SBSO has recorded with a soloist, although Dudamel, even at his relatively young age, already has an impressive resume of accompanying soloists.

There are two features of this recording that stand out. First, the recording is very clean and quiet. Until we hear the audience applaud at the end of each concerto, it is almost impossible to tell that it is a live recording. One hears no coughs or other extraneous noises. It is a pleasure to appreciate the qualities and excitement of a live recording without distracting noises from the audience.

And speaking of excitement, if there is one word to describe these performers, it is “exciting.” On this record, we simply have two of the most electrifying musicians of the day accompanied by an orchestra that played a concert at Carnegie Hall that Wang described as “the most exciting concert I’ve been to.” With this much enthusiasm by the soloist, conductor and orchestra, great things were bound to happen. And they did.

One problem with recording the Rachmaninoff is that it is next to impossible not to compare it with some of the great recordings of the work. For example, my favorite is the classic 1977 recording by Lazar Berman with Claudio Abbado conducting the London Symphony Orchestra. Although the present one doesn’t live up to that one in my estimation, it is nevertheless a wonderful addition and worth every minute.

If you are expecting a Rachmaninoff that is fiery throughout, this isn’t the recording for you. In fact, this Rachmaninoff is decidedly understated and almost muted. And anyone who is familiar with Wang’s powerful playing might be surprised at the quiet lyrical delicateness with which she handles some of the passages. However, when it counts, she and the orchestra will test the mettle (and metal) of your speakers.

Unlike the Rachmaninoff, the Second Piano Concerto by Prokofiev is less well known, and it is here, I think, that the Dudamel-Wang duo really knock the ball out of the park. Wang displays a deep understanding of the work, and Dudamel’s direction is spot on. In both concertos, Dudamel let’s us hear Wang; the orchestra is truly there to accompany the soloist.

This is really a must-have disc for anyone who is a fan of the piano concerto repertory or of Wang or Dudamel. If this disc is any indication of the special musical relationship between the two, we can only hope that there are many more recordings to come.

Wang’s North American tour will include a stop in Los Angeles to perform Rachmaninoff with Dudamel and the LA Philharmonic Dec. 19-22. For a complete list of tour dates, visit www.yujawang.com.