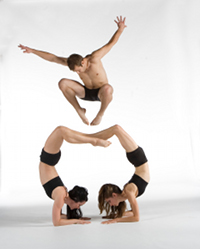 It’s been six years since Jamie Nichols organized the first Celebrate Dance festival, an invitational showcase of Southland dance talent that rocks Glendale’s Alex Theatre for one evening each March. With Celebrate Dance, Nichols – former director of the Pasadena-based dance company Fast Feet – offers a leg up to deserving artists and maintains standards of excellence that make the show a tremendous opportunity for audiences. This year’s celebration, packed with nine premieres and LA debuts by eight different companies, comes to the Alex this Saturday, March 12, at 8 p.m.

Nichols brings two exciting out-of-town additions to the lineup of LA-based artists in Celebrate Dance 2011: San Diego’s Malashock Dance and Brooklyn’s Creative Outlet Dance Theatre. Director John Malashock, former Twyla Tharp dancer and one of the LA Times’ “2011 Faces to Watch,” has been making highly physical, emotionally charged work with his company since 1988 and recently garnered two Emmy Awards for his dance films. Called “a master of modern duets” by The San Diego Union-Tribune, Malashock offers a duet of his own and one by company member and former dancer with LA’s Lewitzky Dance Company Michael Mizerany to Celebrate Dance audiences.

Creative Outlet Dance Theatre, under the direction of Jamel Gaines, will close the show with Gaines’ “Prize.” Danced to excerpts of speeches by President Obama, this LA premiere tackles some of the weightiest issues of the moment: identity, race, political dissonance, war, and peace. To these troubled waters Gaines is sure to bring his signature electrifying vitality – a quality So You Think You Can Dance fans will recall from his group work that aired on the show this past season.

The out-of-town guests will share the stage with some of LA’s finest: BARE Dance Company, Deborah Rosen and Dancers, Monat Dance, Regina Klenjoski Dance Company, Terri Best Dance, and Visions Dance Theatre. Klenjoski, who organizes the successful SOLA dance festival in Torrance each year and has been a staple of the LA dance scene for over a decade, opens the show with an ensemble piece that boasts an original sound score by David Karagianis and addresses another relevant issue: how technology affects our ability to connect.

With so much talent assembled for a single evening, Nichols maximizes the impact of Celebrate Dance for artists and audiences alike by bringing a new generation of dance viewers to the theatre. Grants from the Flourish Foundation have enabled her to give away hundreds of Celebrate Dance tickets to LA Unified students over the years, and she’s made the show accessible to families by offering a $12 children’s ticket. This year, hoping to set a new precedent of affordability in the LA arts community, Nichols has lowered the children’s price to $10.

The chance to see these eight companies for a single ticket (adult price only $15-$35) should not be missed. For a glimpse of what’s in store, check out the Celebrate Dance 2011 trailer. And as the show has sold out for three years running, buy those tickets now.