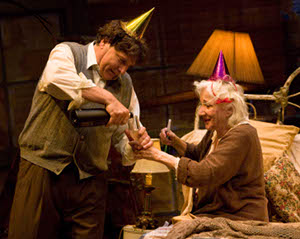 Morris Panych directs his script about a man who comes to the deathbed of an aunt he hasn’t seen in 30 years. Barricelli continually rants and raves, spouting many witty one-liners for almost an hour before Dukakis utters her first words, “Merry Christmas.” Then Act One ends.

Halfway into the second act, a wonderful payoff finally materializes that has the audience howling. Still, Dukakis hardly speaks. Surely, Panych could have written a few more lines for the brilliantly talented Dukakis to voice. What a waste of Dukakis’ wonderful theatrical tones that could have filled the entire theater. I guess two hours of a mute Dukakis miming is better than no Dukakis at all!

Much applause goes to Ken MacDonald for his set design of the beautiful, detailed loft that Dukakis’ bedridden character is imprisoned in. Credit for the very effectual lightning and New Year’s festivities effects outside the loft’s huge windows go to lighting designers Alan Brodie and Robert Hahn and sound designer Cricket S. Myers.