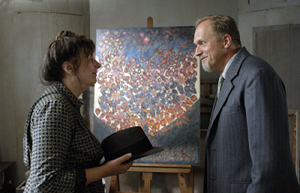 “Séraphine,” a new film written and directed by Martin Provost, is a fascinating and sensitive portrait of an artist, Séraphine Louis (known as Séraphine de Senlis), working as a cleaning lady when she is discovered by German collector Wilhelm Uhde. Fittingly, this film about art is also a fine example of artistic cinema; not surprisingly, it won seven Césars (French Academy Awards).

This fictionalized account brings to light an artist not widely known, yet compared by Uhde in the film to Vincent Van Gogh. He says that both were “ahead of their time.” The comparison is apt for other reasons as well. Like the exceptionally talented Van Gogh, Séraphine struggles with insanity. And though Uhde is by no means a Theo, he does encourage Séraphine’s painting and try to dissuade her from the menial work that steals time from her passion and talent, and he eventually becomes her patron after the war.

Séraphine, played with innocence and a touch of magic by Yolande Moreau (“Amelie,” “The Horseman on the Roof”), is a poor, 48-year-old French woman who spends her days cleaning apartments, washing sheets in the river, and even working at the butcher shop, so she can spend her nights painting. Moreau makes Séraphine’s most mundane activities a pleasure to watch, and each instance a revelation of a unique character that is eccentric and exceptionally real.

Part of Séraphine’s rituals is wandering off into the countryside to commune with nature, and in one of the first scenes, we see her climb a tree and sit in it accompanied by the peaceful sound of insects and birds – it’s a beautiful image that Provost repeats in various ways. She is driven to paint, buying supplies from a local shop when she can afford them and mixing her own paint colors with items that are free and accessible to her, like blood from the butcher shop and mud from the riverbed, in a mortar and pestle. She often stays up all night singing religious songs and painting with brushes and fingers, claiming that she started painting when her guardian angel spoke to her.

Uhde, played by Ulrich Tukur (“The Lives of Others,” “Solaris”), rents an apartment in the French countryside in 1912, where Séraphine works as a cleaning lady, to get away from a society that alienates him. Though he was a prominent critic and collector – he was the first to buy work by Picasso and Braque and discovered Rousseau – there are hints that his homosexuality is at least partly what drove him from Germany to Senlis. After seeing Uhde crying, Séraphine tells him: When I feel sad, I go for a walk in the country and touch the trees and talk to the birds, flowers, and insects, and I always feel better. 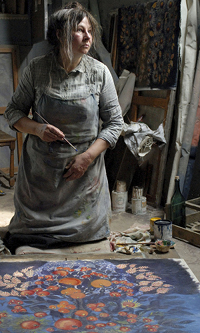 Uhde accidentally discovers a painting on wood panel by Séraphine at a dinner party where art snobs criticize the very talent (the naïve or modern primitive artists) that Uhde had the genius for discovering. He immediately buys the decorative-looking picture of apples, purchases others from Séraphine, and promises to show her to collectors and get an exhibition. But the war intervenes, and Uhde must flee. The artwork he is forced to leave behind is confiscated, but in the film we see Séraphine pick up one of her paintings from his ransacked apartment, a sure sign that her hopes have been dashed.

Yet Séraphine continues to paint , holing herself up in her apartment and practically giving up on finding work. She is eventually rediscovered by Uhde in 1927. Her talent has grown, along with her eccentricities. Uhde becomes her patron, and Séraphine’s dreamy eyes embrace a new fantasy of success, as she takes on a bigger apartment and can finally focus on painting without worries about where money will come from for food and rent. But the solo exhibition is not to be until three years after her death.

This is Séraphine’s story, and while Udhe always remains something of a mystery, the more that is revealed of Séraphine, the more of a mystery she becomes. Others do not understand her odd behavior, and some mock her, but we root for her, even while witnessing her sad decline. In one scene, Séraphine gets to show off some of her canvases of fruit and flowers to people she knows, and a nun – Séraphine worked in a convent before going to Senlis – asks, Are you sure your guardian angel told you to paint that? Another woman points out how Séraphine’s flowers look like scary, crawling insects. Yes, sometimes they scare me, Séraphine says.

Perhaps her life would not have had the beauty that it did if she had been completely sane. We could say the same of Van Gogh. “Imagine Séraphine now,” said writer/director Provost in an interview for Music Box Films. “She would be stuck with antidepressants, she would sit in front of her TV, and she wouldn’t paint.”

“Séraphine” is playing at the Landmark Theatre in West LA and at Laemmle’s Theatres in Encino and Pasadena.

Two other must-see French films are currently available on DVD: “Tell No One” and “A Few Days in September.” Guillaume Canet’s “Tell No One,” with Francois Cluzet, Marie-Josee Croze, and Kristin Scott Thomas, was the most popular foreign-language film of 2008. The mystery/thriller is set in motion when a man receives an email from his childhood sweetheart-turned-wife years after she was supposedly murdered. Santiago Amigorena’s “A Few Days in September” is another mystery/thriller, starring Juliette Binoche, John Turturro, and Nick Nolte. Everyone is trying to get to an intelligence agent who has disappeared and, it turns out, has information about Sept. 11 in a story told with humor, poetry (the mad assassin played by Turturro actually recites William Blake poems), romantic locales like Venice, and stunning cinematography. Look for these movies where you rent movies or check them out at the library.