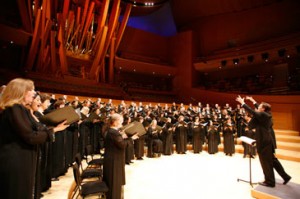 The Los Angeles Master Chorale, Musica Angelica, and the Los Angeles Children’s Chorus will join together for a much-anticipated performance of Bach’s St. Matthew Passion, played for the first time in Disney Hall.

The Master Chorale always shines, and this event will be special with featured soloists Pablo Cora as the Evangelist and Steve Pence as Jesus.  They are joined by sopranos Tamara Bevard and Deborah Mayhan; altos Kristen Toedtman, Adriana Manfredi and Leslie Inman; tenor Jon Lee Keenan; and baritone Abdiel Gonzales.

Musica Angelica, one of the most distinguished of Los Angeles’ Early Music ensembles, will be performing on period instruments in their third appearance with the choir in four years.  They are noted for their informed sound.  The Los Angeles Children’s Chorus, founded in 1986, and led by Artistic Director Anne Tomlinson, is recognized coast to coast.  Gershon said of the concert that “it is an honor to be the first person to conduct Bach’s famed work in Disney Hall.”

Tickets: $19 – $124; student rush seats available at box office two hours before the performance. For ticket information, call (213) 972-7282, or visit www.lamc.org. (Tickets can only be purchased at the Walt Disney Concert Hall Box Office on concert days starting two hours prior to the performance.)

The composers on the program are a teacher-student pair.  Lithuanian Vykintas Baltakas (b. 1972) caught the attention of his mentor Peter Eötvös while working together at the Hungarian composer’s International Institute and at the Music Academy in Karlsruhe.  The scheduled works include Baltakas’ (co)ro(na), and three by Eötvös: Snatches of a Conversation, with Timur Bekbosunov (speaker) and Brandon Ridenour (trumpet); Korrespondenz, played by the Calder Quartet; and Sonata per Sei.

Baltakas conducted the world premiere of (co)ro(na) in 2005.  Expect a shock from his orchestration of piccolo E-flat clarinet, soprano saxophone, and piccolo trumpet in their upper registers.

Snatches of a Conversation (2001) is the title work on Eötvös’ BMC disc Snatches.  The work calls for a speaker reading nonsensical words and syllables (in English) from a notated part, which, Eötvös writes, is “to be whispered into the microphone, in somewhat voiced sounds.”  Tenor Bekbosunov from Kazakhstan has built his reputation as an interpreter of contemporary music.

Eötvös writes that Korrespondenz depicts the drama between Leopold Mozart and his son, Wolfgang Amadeus Mozart. The first violin and viola represent Wolfgang Mozart and the second violin and cello give his father’s side of the correspondence.  Can the Calder Quartet relate to the theme?  I expect we’ll hear.

Sonata per Sei is written for two pianos, a sampler-keyboard, and three percussionists, and was premiered at the International Bartók Festival in July 2006. The composer writes that he has “developed a few of Bartók’s ideas and ways of thinking, in particular his fondness for parallel runs in octaves, sixths, or other intervals.”

Tuesday, March 9, 8 p.m.
Veronika Krausas, composer and professor at the USC Thornton School of Music, will speak at the Upbeat Live pre-concert talk at 7 p.m.