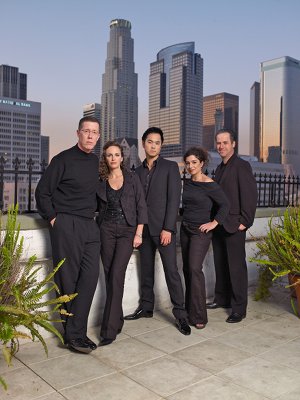 The incredible bounty of musical arts in Los Angeles is a blessing not to be passed by, and there are some especially fine chamber concerts this week.

On Saturday, the Chamber Players of Los Angeles, with Music Director John Kennedy, will open their outstanding collection of programs this season with  String Hit, Plucked, and Bowed.  The program includes Alvin Singleton’s “Intezar” for viola, cello, and double bass, and the Beethoven Trio in B-flat Major for violin, cello, and piano, Op.11.

There are two opportunities to hear the noted Borromeo Quartet – Saturday is the first, featuring “Papa” Haydn and Schumann at the Doheny Mansion; and Wednesday they bring Bach, Beethoven, and Bartok to the Northridge Plaza del Sol Performance Hall.

Monday night presents with an outstanding concert by the incomparable Southwest Chamber Music at Zipper Hall, where we will get a preview of the music of their Guadalajara tour.

All in all, this week’s chamber music cornucopia is a testament to the incredible arts scene in Los Angeles.  What a season this will be!

Canadian virtuoso violinist Angèle Dubeau and La Pietà are in concert Saturday and Sunday at the Théâtre Raymond Kabbaz at Le Lycée Français de Los Ángeles. La Pietà is an all-female string-ensemble in high demand and has developed a reputation for excellence throughout the Americas and Asia. The program will include Philip Glass’ “Overture La Belle et la Bête.” Astor Piazzolla’s “Pieza para Orchestra de Camera” from “Orfeo ed Euridice,” and works by Jacques Offenbach, G. F. Handel, Bela Bartok, and others. The Théâtre Raymond Kabbaz opened in 2000 and dedicates a significant part of its programming to French language and culture.

The Doheny Mansion is the venue for the Da Camera Society Chamber Music in Historic Sites concert this Saturday.  The Borromeo String Quartet with Nicholas Kitchen and Kristopher Tong (violins), Mai Motobuchi (viola) and Yeesun Kim (cello) will perform the Haydn String Quartet in F Minor, Op.2 No.5, and String Quartet in B-flat Major, Op.76 No.4, “Sunrise,” and the Schumann String Quartet in A Minor, Op.41 No.1. The group formed in 1989 and has distinguished itself with numerous top prizes both domestic and international. There will be a pre-concert talk at 7:40 p.m.

The Chamber Players of Los Angeles, with Music Director John Kennedy, will open their season on Saturday with a program titled String Hit, Plucked, and Bowed.  The program includes Alvin Singleton’s “Intezar” for viola, cello, and double bass, and the Beethoven Trio in B-flat Major for violin, cello, and piano, Op.11.  “Intezar,” written in 1994, was commissioned by the Goethe-Institut Atlanta and was premiered by Trio Basso of Cologne.  Singleton should be an interesting contrast to Beethoven; I will be curious to hear these chamber works back-to-back.

Another truly intriguing program – Jeff von der Schmidt  has done it again.  Don’t miss this opportunity to preview Southwest Chamber Music‘s tour to Guadalajara, Mexico, in December.  In addition to the usual cast, performers will include the Tambuco Percussion Ensemble of Mexico City, and Soprano Suzanna Guzmán is back – what a voice! She is an absolutely superb artist, not to be missed.

The program will include: Alexandra du Bois’ “Bryant Medley”; John Adams’ “Shaker Loops”; Carlos Chávez’s “Cuatro Melodías Indias”; and Aaron Copland’s “Appalachian Spring.”  I must admit that my recommendation is biased by the fact that I am a sucker for the succor of “Appalachian Spring,” and to hear Southwest Chamber perform this quintessential Copland masterpiece will be sweet. Violinists Lorenz Gamma and Shalini Vijayan always play beautifully together; and I always look forward to hearing them.

I reviewed another piece by Alexandra duBois at the season opener last month, and I found that her music is distinctively emotive and approachable.  She was selected to represent our nation as one of the American composers-in-residence for the Ascending Dragon Festival, Southwest Chamber’s major cultural exchange between the United States and Vietnam in a series of concerts and other events here and abroad in 2010.  I am sure we will hear more about that at the pre-concert talk at 7:30 p.m.

The Borromeo String Quartet will return Wednesday night as guests of the Music Guild at the Plaza del Sol Performance Hall of Cal State University, Northridge.  The program will include the Bach-Kitchen Passacaglia and Fugue in C Minor for Organ, BWV582; Bartók’s String Quartet No.4; and the Beethoven String Quartet in F Major, Op.59 No.1.

I particularly like Ginastera’s “Impressiones de la Puna” for flute and string quartet. Although not one of the composer’s favorite creations, it offers a glimpse of a young genius with his unmistakably youthful vitality.  Flutist Adrian Spence is also the distinguished artistic director of Camerata Pacifica, and his efforts have helped to catapult the ensemble into the limelight of the national and international chamber music scene.