There are three outstanding concerts this weekend: Saturday night, acclaimed baritone Thomas Hampson is singing at the Dorothy Chandler Pavilion; Sunday we have an opportunity to hear the vibrant Enso String Quartet offering an outstanding program at Caltech’s Beckman Auditorium in Pasadena; and Monday, homeboy and conducting superstar Michael Tilson Thomas is in town for a reunion at USC’s Bovard Auditorium.

LA Opera presents acclaimed baritone Thomas Hampson, accompanied by pianist Vlad Iftinca, touring nationally with selections from his “Song of America” project, which is a collaboration with the Library of Congress to record and perform a uniquely American song repertoire. Hampson serves as special advisor to the Library of Congress on American song, and he is especially interested in song that communicates the history and spirit of the American story. Other stops on his recital itinerary are San Francisco, Portland, Santa Barbara, Boulder, Princeton and Atlanta. Critical and public reaction to Hampson’s first “Song of America” tour were glowing. The New York Times declared that “Mr. Hampson conveys the idea of an oral tradition that it is his mission to pass on, with the closed-eyed intensity of a blind poet when he is singing, and the zeal of an evangelist when he is addressing the audience about its cultural heritage.”  There will also be a special Library of Congress exhibit and a CD signing with Hampson following the program. 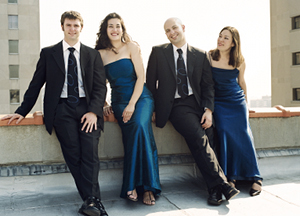 I absolutely love the Argentine Alberto Evaristo Ginastera’s String Quartet No. 1, Op.20. One of his early masterworks in the genre, it was written in 1948 and influenced by his studies with Aaron Copland at Tanglewood. The match of the music with the energetic young Enso String Quartet should be superb. Beethoven’s Quartet in F Major, Op.18 No.1, and Sibelius’ Quartet in D Minor, Op.56, “Intimate Voices,” round out this program in the Coleman Chamber Concert series.

Michael Tilson Thomas is in town? Yes! Where? Disney Hall? No. He’s returning to his alma mater to conduct the USC Thornton Symphony Orchestra on Monday night and to reminisce about what it was like to be a student at USC during the 1960s.  This homecoming should be quite inspiring and entertaining. Born and schooled in Los Angeles, Tilson Thomas has gained international acclaim as the music director of the San Francisco Symphony, the founder and artistic director of the New World Symphony and a principal guest conductor of the London Symphony Orchestra. His recorded repertoire of more than 120 albums includes works by such composers as Bach, Beethoven and Stravinsky as well as his pioneering work with the music of Charles Ives, Steve Reich, John Cage, George Gershwin and Elvis Costello. He is currently recording the complete orchestral works of Gustav Mahler with the San Francisco Symphony. Among his many honors and awards, Tilson Thomas is a Chevalier dans l’ordre des Arts et des Lettres of France, a recipient of the Ditson Award for his contributions to American music, the American Symphony Orchestra League’s Lifetime Achievement Award, seven Grammy Awards for his recordings, and the Peabody Award for his radio series “The MTT Files.”