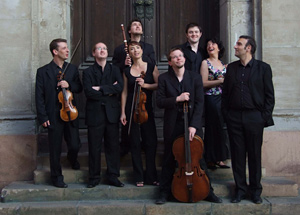 In Classical Focus, Theodore Bell chooses a few highlights from Jim Eninger’s Clickable Chamber Music Newsletter, which casts a wide net and regularly lists numerous concerts in the LA area (not just chamber music either). Here are his top picks from the latest newsletter, with additional information for the classically curious.

A Gordon Getty Concert this Sunday, Sept. 13, at 3 p.m. features Les Paladins, an early music ensemble that specializes in the beautiful music of the French and Italian Baroque era. The French ensemble, formed in 1997, has earned acclaim for its recordings and performances around the world. The program in the Harold M. Williams Auditorium at the Getty Center (1200 Getty Center Drive) includes selections by Couperin, Lully, Charpentier, and Rameau, all selected to complement the exhibition “Cast in Bronze:French Sculpture from Renaissance to Revolution” currently on display at the Getty. It should be a wonderful multisensory experience of fine sculptural art and music. Visit the website, or call (310) 440-7300 to reserve seats.

The Azusa Pacific University Artist Concert Series presents the Cambridge Trinity College Choir with Stephan Layton conducting on Monday, Sept. 14, at 7:30 p.m. at the Munson Recital Hall of Azusa Pacific University, 901 E. Alosta Ave., Azusa.  The Trinity College Choir is a premier mixed-voice ensemble with a distinguished choral tradition that dates back centuries. The Choir is noted for its wide-ranging repertoire and enjoys an extensive discography and international touring schedule. The program features selections from British composers across the ages, including Tallis, Byrd, Purcell, and Stanford; there are also contemporary works by modern Europeans Arvo Pärt and Pawel Lukaszewski as well as Californians Morten Lauridsen and Eric Whitacre.  A cappella works by Polish composer Lukaszewski released last year on the Hyperion label were described as “precise and exuberant… wonderfully expressive… elementally exciting” by the Daily Telegraph, and “magical and sophisticated” by International Record Review.  Tickets are $13, $7 for seniors, and free for students.

Camerata Pacifica will be performing a concert of Huang Ruo, Turina, and Beethoven throughout the region, but my personal suggestion is to hear them Thursday, Sept. 17, at 8 p.m. at the Colburn School’s Zipper Concert Hall (200 S. Grand Ave.). Chinese composer Ruo’s “To the Four Corners” should be a treat, with Ji Hye Jung as percussionist and Jose Franch-Ballester as clarinetist. Balance that with Turina’s Quartet in A Minor for Piano and Strings, Op.67, and end with the ever-worthy Beethoven Quartet in E-flat Major for Piano and Strings, Op.16, and you have a very satisfying program. The concert will feature pianist Warren Jones, violinist Catherine Leonard, violist Richard Yongjae O’Neill and cellist Ani Aznavoorian. If you cannot make the Thursday show, or would just prefer the sumptuous ambiance of the Huntington Library, catch the penultimate concert there Wednesday, Sept. 16, at 8 p.m. The acoustics will be significantly better at Zipper – but either will provide a superb venue for this program.