Camerata Pacifica resumes their monthly swing through the Southland with two concerts in the metro area at the Huntington Library on Tuesday and at Zipper Concert Hall on Thursday.  Noted percussionist Ji Hye Jung (marimba) joins principals Catherine Leonard (violin), Ani Aznavoorian (cello), and Warren Jones (piano) with an inspired collection of titles. 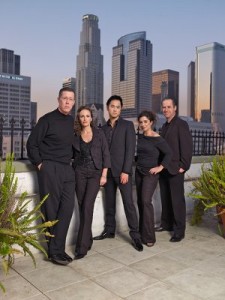 Called “the best chamber music reason to get out of the house” by the Los Angeles Times, Camerata Pacifica is noted for its commitment to musical excellence and exploration with a repertoire that reflects the breadth of the chamber music genre and the delight in discovering new music.

The program of this week’s concerts is a prime example of Camerata Pacifica’s ability to deliver on this mission:
J.S. Bach: Sonata in A Major for flute and marimba, BWV1032

Each artist of the ensemble has received impressive critical acclaim, and the artistic collaboration through Camerata Pacifica has melded into a distinctive local prize.
Ji Hye Jung recently won consecutive first prizes at the 2006 Linz International Marimba Competition and the 2007 Yale Gordon Concerto Competition in Baltimore.

In her fourth year as principal cellist of Camerata Pacifica, Ani Aznavoorian is in demand with some of the world’s most recognized ensembles.  She was described by the Los Angeles Times as a “cellist who shows great sensitivity and great virtuosity.”

This year has been good to Warren Jones, named as “Collaborative Pianist of the Year” by the publication Musical America for his performances with many of today’s best-known artists.  The Boston Globe termed him “flawless” and “utterly ravishing”; and The New York Times, “exquisite.”   Jones’ discography touches many major labels with an extensive repertory, and he received an honorary doctorate from the San Francisco Conservatory of Music this year as well.

What a great concert to end the summer and anticipate the exciting autumnal season ahead of us.  Either venue will be superb; choose for yourself – the ambiance of the Huntington or the pure acoustical bliss of Zipper Hall.

These events were selected from among those listed in Jim Eninger’s Clickable Chamber Music Newsletter, an extensive calendar of upcoming music events, large and small, happening all around Los Angeles.