Flutist Lisa Schroeder and guitarist Michael Nigro perform as the Noteworthy Duo on Sunday, Sept. 20, at 4 p.m. at St. Gregory’s Episcopal Church, 6201 E. Willow St., Long Beach. Admission is free. Noteworthy’s interest in South American music can be heard throughout their extensive flute and guitar repertoire. Expect them to include commentary and anecdotes about the composers and works they perform. The California-based duo tours extensively across the United States garnering great reviews, and has performed live on television and radio programs. Their debut CD, titled “Between Guitar and Flute” was released in February 2009. 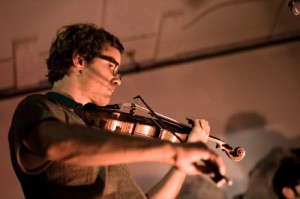 Matt McBane is founder of the Carlsbad Music Festival, which kicks off with a satellite concert in LA on Sept. 23.

The Carlsbad Music Festival, founded by composer and violinist Matt McBane, will have concerts in Carlsbad Friday through Sunday, Sept. 25-27. And while it’s definitely worth the drive to hear world premieres and new music performed by the Calder Quartet, California E.A.R. Unit, and composer/improviser/guitarist Fred Frith, there will also be a satellite concert on Wednesday, Sept. 23, at 8 p.m. in LA – at the Colburn School’s Zipper Hall.

McBane, violinist and composer for Build, his Brooklyn-based indie-classical band, studied composition at the University of Southern California’s Thornton School of Music with Donald Crockett. He pointed out that this year’s sixth annual Festival features six world premieres, five Composers-in-Residence, the Festival debut of the California E.A.R. Unit, and the return of the Festival’s Founding Ensemble-in-Residence, the Calder Quartet.

The program for the LA concert includes:

Following is a description of the Sept. 23 concert written by McBane for the Festival goers: “The LA Satellite Concert features a program entirely consisting of world premieres and works commissioned by the Festival. The two premieres, Keeril Makan’s ‘After Forgetting’ and Linda Catlin Smith’s ‘Wanderer,’ were commissioned by the E.A.R. Unit. Makan’s music is deeply intellectual yet visceral, muscular and emotionally raw; Smith’s music is often slow and soft with a keen attention to the colors of sound set in a world of ambiguity. The two past CMF commissions are Fabian Svensson’s 2008 ‘Singing and Dancing’ (programmed in what has become a CMF tradition of programming last year’s Composers Competition winner at the LA Satellite concert) and my 2004 ‘2×4.’ ‘Singing and Dancing’ is a minimalist work that embodies Svensson’s music’s seemingly disparate qualities of austere beauty and wry humor. ‘2×4’ was the first piece written for the first Carlsbad Music Festival back in 2004 and it is a great joy to bring many of the Festival musicians together to reprise it this year. Not only is this a collaborative affair between the two ensembles and myself, but it is a family affair with husband and wife violists Jonathan and Josephine Liu Moerschel, and violinist and cellist brothers Ben and Peter Jacobson.”

Tickets for all concerts are $25 for priority seating, $15 for general admission, $8 for students (at door), and can be purchased at www.carlsbadmusicfestival.org. Also visit the website for details about the Sept. 25-27 concerts at the Dove Library in Carlsbad.