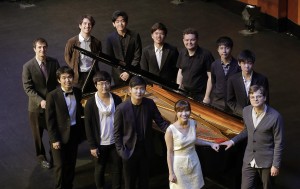 The 12 semifinalists advance to the Quarterfinal Round at the Fifteenth Van Cliburn International Piano Competition held at Bass Performance Hall in Fort Worth, TX. / Photo by Ralph Lauer

Leonard Slatkin, chairman of the Jury for the Fifteenth Van Cliburn International Piano Competition (taking place May 25-June 10, 2017, at Bass Performance Hall), announced the 12 pianists advancing to the Semifinal Round, which starts tomorrow, June 1, and continues through Monday, June 5. Watch the performances live in Fort Worth, TX, online or in cinemas (details below). Culture Spot LA will start blogging tomorrow!

Twenty quarterfinalists each performed a 45-minute recital in the Quarterfinal Round, which took place May 29–30. They performed live at Bass Hall before the nine-member jury and hundreds of patrons, as well as to a worldwide audience via the Competition’s live, fully produced webcast. The entire Competition can be viewed live and on demand at Cliburn.org.

In the Semifinal Round, June 1–5, each competitor performs twice. Each semifinalist will perform a 60-minute recital, without repeating any repertoire from earlier rounds; and each will perform a Mozart concerto with the Fort Worth Symphony Orchestra conducted by noted Mozart specialist Nicholas McGegan.

At the end of the Semifinal Round performances, six competitors will be chosen to advance to the Final Round, which will run June 7–10. The winners of the Fifteenth Van Cliburn International Piano Competition will be announced in a ceremony that begins 7 p.m. June 10.

WATCH THE PERFORMANCES LIVE, ONLINE OR IN CINEMAS

TICKETS For complete ticket information, click here. Patrons must be at least 10 years old to attend.

ONLINE You can live-stream every performance of the Fifteenth Van Cliburn International Piano Competition at Cliburn.org and cliburn2017.medici.tv in partnership with medici.tv, the world’s leading classical music channel. Also download the Cliburn mobile app, now available in the Apple Store and Google Play!

IN CINEMAS The final two concerts will be broadcast in theaters nationwide on Saturday, June 10. Tickets for “2017 Cliburn Competition LIVE in Cinemas” can be purchased online by visiting www.FathomEvents.com or at participating theater box offices.