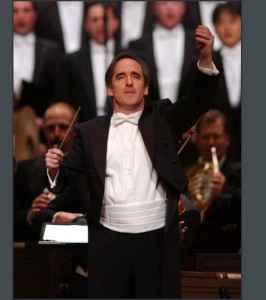 This weekend, James Conlon is leading the LA Phil in a series of all-Prokofiev concerts, including the Symphony No. 1 in D major, Op. 25, the “Classical Symphony”; the Piano Concerto No. 1 in D-flat major, Op. 10; and selections from “Romeo and Juliet.”

The concert on Saturday night began a little late not just because of the rain, but perhaps also because Maestro Conlon, who is Music Director of LA Opera, spoke at the pre-concert Upbeat Live and didn’t finish until 10 minutes before he was scheduled to conduct the performance.

But fatigue was nowhere to be found in Conlon’s demeanor as he bounded on stage and launched into an up-tempo and muscular version of Prokofiev’s Symphony No. 1. Prokofiev’s “Classical Symphony” is so named (by the composer himself) because it was composed in the style of Haydn. But although the style of the work and the scoring (e.g., two flutes, oboes, clarinets, trumpets, horns, strings and timpani) may be Haydnesque, Conlon’s performance was pure Beethoven. Conlon ripped into the score with alacrity and volume, true to the fortissimo marking at the beginning of the first movement, Allegro, which sounded even louder in Disney Hall.

Conlon’s version of the “Classical Symphony” brought cheers from the audience, and the energetic performance, along with Conlon’s own energy, provided a successful antidote to any fatigue in audience members from driving in L.A. traffic in the rain.

The second piece on the program, Prokoviev’s Piano Concerto No. 1, was played brilliantly by the 21-year-old French soloist, Lise de la Salle. Although she appeared slightly awkward walking on stage and taking bows after her performance (perhaps not so unusual for a 21-year-old), there was nothing at all awkward about de la Salle at the piano. She demonstrated a power, range, and versatility that reminded one a little of the young Martha Argerich and which seemed all the more impressive because she sat so far back from the piano. She also did not display the emotionally expressive movements so popular with some of today’s soloists. But she did not need to; her playing spoke for itself.

As one might expect from an operatic conductor, Conlon expertly accompanied de la Salle both leading and following her at the appropriate times.

After intermission de la Salle could be seen with ticket in hand, looking for her seat in the audience to hear the second half of the concert, only to find an interloper in her seat. After he cleared out and she sat down, she was greeted by nearby patrons with handshakes and praise for her playing.

After walking on stage for the second half, Conlon proved he wasn’t finished talking. He grabbed a cordless microphone and described how he “stole” sections from each of the three suites of orchestral music from the ballet score Prokofiev wrote for “Romeo and Juliet” so that the selections told the story from beginning to end.

Not only is Prokofiev’s score a modern masterpiece, but the orchestra under Maestro Conlon rendered it masterfully with numerous stand-out solos by the LA Phil principals, including Concertmaster Martin Chalifour, Associate Principal Cellist Daniel Rothmuller, Principal Violist Carrie Dennis, and Principal Oboist Arianna Ghez, all of whom garnered the most cheers from the audience during their solo bows.

Conlon used all the superb musical resources of the LA Phil and Disney Hall to evoke the emotional highs and lows of Prokofiev’s score. And at the quiet conclusion of the last section, “Death of Juliet,” Maestro Conlon was able to maintain perfect silence from the audience by holding his left hand in the air for at least 10 seconds before letting it drop to the cheers of the audience.