Creation at the Theatre at Boston Court 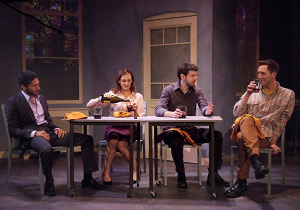 The Theatre at Boston Court presents a first-rate world premiere of Kathryn Walat’s smart and intricate “Creation.” This two-hour show reveals the effects on three semi-random people as they relate and react to Ian, an evolutionary biologist who’s been struck by lightning on his 40th birthday.

Johnathan McClain, as Ian, deftly keeps everyone both onstage and in the audience questioning his mental balance as he hears music constantly playing in his head.

As his wife Sarah (an accomplished pathologist who chose performing autopsies over seeing live patients as she doesn’t like to deal with sickness), Deborah Puette hits all the right notes. She communicates Sarah’s elation in Ian’s seemingly total recovery, her frustration in feeling Ian’s not 100% healed, her guilt in not being seconds quicker in reviving Ian, and her warranted professional respect (or is it unwarranted personal attraction?) for fellow colleague Amal, recognized in his field of matters of the brain.

Well limned by Ethan Rains, Amal skillfully peels away layers of professional, analytical veneer through the course of this play to reveal the sensitive, three-dimensional catch that he is.

The fourth player in this finely tuned quartet of actors, Adam Silver, as Zach the gay graduate student working on his master’s degree in music, ably provides the creative counterpoint to the scientific, by-the-facts, reasoning trio and, in the process, brings welcome comic relief to the seriousness that keeps coming up.

Kudos to all the fine production aspects of this Boston Court show — Francois-Pierre Couture created a set with a backdrop that served as at least five different locations, all complemented by the perfectly cued lighting of Andrew J. Hungerford, the rear projections of Adam Flemming, the sound design by Bruno Louchouarn, and the best choreographed set changes by a cast and crew I’ve seen in Los Angeles. Michael Michetti directed his talented cast at a smooth, taut pace.

Performances continue through Nov. 11 at the Boston Court Performing Arts Center, 70 N. Mentor Ave., Pasadena 91106. Show times are Thursdays through Saturdays at 8 p.m., Sundays at 2 p.m., with an additional performance on Wednesday, Nov. 7. For tickets, visit BostonCourt.org or call (626) 683-6883.