‘Crime and Punishment’ at A Noise Within 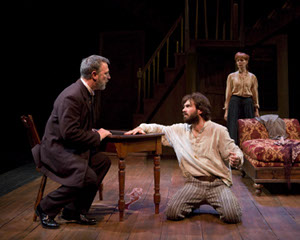 A Noise Within's "Crime and Punishment" runs through Dec. 17. / Photo by Craig Schwartz

I admit to more than a little skepticism about the idea that three actors could pull off anything resembling a credible reading of Dostoyevsky’s “Crime and Punishment.” The press release swore they would pull it off in 80 minutes. Yeah, right.

Still, it was offered by A Noise Within – one of the nation’s leading repertory companies and the only classical repertory company in Southern California.  How bad could it be? My fascination with the audacity of the concept lured me to Glendale.

Because of the theater’s thrust-stage configuration, the audience enters the realm of the play when they step into the house, greeted by the multiple doors, staircases, and landings of Michael Smith’s brooding unit set. From the first scene onward, characters magically emerge from and disappear into the mist of dreams, imagination and non-linear time, under director Craig Belknap’s admirable realization of this adaptation by Marilyn Campbell and Curt Columbus.

Among the three actors executing this monumental assignment is Michael A. Newcomer as the tormented Raskolnikov. Making his ANW debut, Newcomer moves subtly from the cerebral to the visceral over the course of the play. A great admirer of Napoleon, Raskolnikov aspires to the perpetration of world-changing mayhem, theorizing that men of great intelligence and vision are not bound by the laws that bind the masses. One surmises he would have idolized Hitler. But on his quest for greatness, Raskolnikov’s fatal flaw is conscience.

Also new to ANW, Holly Hawkins does quadruple duty as the self-sacrificing young prostitute, Sonia, and as Raskolnikov’s mother, the abusive old pawnbroker, and the pawnbroker’s passive sister. Hawkins is an actress of considerable skills and fleshes out the characters with an admirable economy of gesture and expression. Here, however, is where the addition of one more actor – in the role of the young prostitute Sonia, through whose love Raskolnikov is redeemed – would have improved the production.

ANW resident artist Robertson Dean plays the Inspector and various other characters.  He is mesmerizing in his cat-and-mouse scenes with Newcomer, and both touching and repellent as Sonia’s alcoholic father.

Costumes by Christina Haatainen-Jones are simple and effective. James P. Taylor’s evocative lighting seamlessly takes us from real-time into the dream sequences and back again.  Sound man Bill Froggatt is responsible for ominous knockings and other effects, woven through a fairly dense landscape of period Russian music.