Crows’ Circus at the Greek 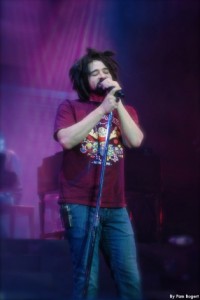 It has been a long time since I’ve been to the Greek Theatre, and what I saw there on July 21 was shocking. The venue hadn’t changed. What was different, what I have never seen before, was a headliner surrendering top billing to become part of an integrated jumbo jumble of talent. The Counting Crows lured nearly 6,000 audience members to the amphitheater with the promise of a rock-and-roll concert but sagaciously delivered us happily into the clutches of the Saturday Night Rebel Rockers Traveling Circus and Medicine Show. All this on a Tuesday.

To be a little less dramatic and a little more accurate, the show’s unconventional structure was not a total surprise to most in attendance. An email blast had gone out to ticket holders who had made their purchase online. I prefer to go to the box office because I hate paying an exorbitant “convenience” fee, so I saved about $20 but missed the announcement, which read in part:

… when the curtain goes up [we] are all going to be walking out onstage together and that show is going to start with EVERY SINGLE ONE OF US onstage singing and playing our brains out.

True to their words, the three lead singers, fronting no fewer than 25 musicians, were there when the curtain went up. It took me a few bars to realize they were covering Van Morrison’s “Caravan” from “Moondance.” It also took me a minute to realize that the white guy in the dreadlocks was Adam Duritz from the Counting Crows. I deduced that the tall black guy in the dreadlocks was Spearhead’s Michael Franti, but I still had no idea who the white guy with the great vocal range and bad hairdo a la “Top Chef’s” Marcel Virgeron was. He turned out to be Augustana’s lead singer Dan Lyus.

The next 40 minutes was what can best be described as organized chaos. Two drum sets, a bunch of guitars and a couple of pianos made for a rollicking good time. Original songs dovetailed with covered tunes, including a brief nod to Michael Jackson via a “Thriller” riff accompanied by Franti’s moonwalk. The set closed with a surprisingly soulful rendition of Leon Russell’s “Delta Lady.”

Intermission was short. Since the bands were integrated, the stage remained the same. The only change was Duritz’s T-shirt. When the curtain rose again, it was clear that the circus banner was more than a decorative prop, it was a concept.

The new set opened with all hands on deck playing a complicated tune Duritz said had never been done live, a thrill for longtime Counting Crows fans. Duritz is a phenomenal talent, both as a singer and a songwriter, and the Counting Crows proved their mettle as a band of talented, well-trained musicians. But a traveling circus needs a ringmaster that is part showman and part snake oil salesman to keep it all together. That job fell to Franti. His Saturday Night Rebel Rockers amazingly turned deep, intricate themes addressing generational poverty and institutional injustices into uplifting, toe-tapping tunes, while Duritz and Lyus tended to bemoan traveling the world and falling in love, sharing a tortured vocal style that, given too much sway, can dampen a good time. Fortunately, Franti’s happy-go-lucky reggae roots brought the mood back to fun and frolic every time.

While everybody seemed to check their egos at the door, they thankfully all brought their own songbooks. In addition to covering songs by Paul Simon and Woody Guthrie, the show magically managed to highlight a significant portion of each bands’ original work. “Hanginaround,” “Mr. Jones” and “Why Should You Come When I Call” were just a few of the featured Counting Crows’ songs. Franti and Spearhead shared “A Little Bit of Riddim,” “Rude Boys Back in Town” and  their first Top-40 hit “Say Hey” from their latest LP titled “Saturday Night Rebel Rockers.” They also rocked the initial encore with a rousing rendition of “Hello Bonjour” from “Yell Fire,” before the Crows hollered back with “Rain King” spliced with the Beatles tune “A Little Help From My Friends.” Augustana got plenty of solo time in prime time with Lyus showing his appreciation by working in a lyrical reference about the rain in Baltimore during his show-stopping performance of the single “Boston” (in addition to profusely thanking Duritz for letting his band break into their set).

Although genres were bent to breaking and the demographic of the players was happily diverse, the ladies were under-represented, but well-represented, by Spearhead’s Cherine Anderson. Considering Duritz’s romantic track record as evidenced by his own introductions to his bittersweet love songs, keeping the tour mostly stag was probably a good idea.