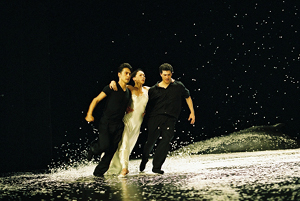 A couple in urgent physical conversation traces and re-traces a horizontal path through an industrial environment of hard surfaces and harsh light. The camera cuts in close so that heads dive and bare limbs slice through our field of vision. Then, when they quiet, we rest intimately in the tangle of her hair and against the contour of his cheek.

A peek at the trailer for the Dance Camera West Festival, which begins June 4, and you’ll quickly understand why Los Angeles has been clamoring for more since Lynette Kessler brought two evenings of dance films to the Getty in 2002. A dancer, choreographer and filmmaker herself, Kessler showed 14 works by various artists in that first Dance Camera West Festival. Audience members at the two sold-out screenings were incensed, Kessler recalls. “People said, ‘Why haven’t I seen this before? Where can I see more?’”

“Beguine,” one of the films appearing at the festival’s June 4 opening at REDCAT, feels like the raucous end of a wedding reception, when people can get ugly, and things can get strange. Through a fog, we see men in untucked shirts and women in rumpled dresses swing and jump and shake in slow motion, while the wooden floor creaks and rocks beneath us like a wave-tossed ship. A tilt finally tips one unsteady reveler out of the wedding party, and suddenly we’re tumbling, sliding, careening with him, triple-speed, down a rocky slope.

This is dance that speaks the language of today’s audiences, especially for residents of a city so steeped in film culture. Like Kessler says, “Everybody’s a film critic. Everybody’s been watching film their whole life, and they’re very invested in it, and they have something to say about it … so it’s engaging.”

Throughout the month of June, the ninth annual Dance Camera West Festival brings short films, documentaries, panel discussions and dance media installations from across the globe to REDCAT, the Downtown Los Angeles Art Walk, UCLA’s Hammer Museum, the Screen Actors Guild, Cheviot Hills Rec Center, Timothy Yarger Fine Art of Beverly Hills, and the Grand Performances series at California Plaza. Kessler explains that festival events are “spread all over town” in order to build audience. DCW ticket prices don’t hurt either; admission for opening weekend screenings at REDCAT is only $10 to $15, and all other festival events are free.

“It really is fun to turn people on to it.” Kessler’s voice rises with excitement as she describes viewer responses to dance films she’s shown. “They come in and they’re just gasping and clapping and laughing and being involved in the kinesthetic experience. … With film you’re right there with [the dancers], sweating with them.”

As the festival has extended its reach to new populations and parts of the city over the past decade, the geographical scope of work presented has also exploded. “Burkina Faso, Iran, Estonia, Uruguay, Cuba …” Kessler rattles off a list of countries represented by recent DCW submissions. Advances in filmmaking technology – like the relatively affordable one-chip video camera – allow artists around the world to produce work in increasing numbers. But if it weren’t for Dance Camera West, Kessler shakes her head emphatically, “you would not see these films in Southern California.”

This year’s festival brings significant new works by established international choreographers, and introduces the most talented emerging artists and the latest dance film experiments to Los Angeles audiences. At the Hammer Museum’s Pina Bausch Symposium, two documentaries by celebrated German director Anne Linsel will have their West Coast premieres. The outdoor Local Makers screening at Cheviot Hills features films by 25 local artists, as well as works by budding filmmakers from LAUSD middle and high schools. And for Kessler, the experimental dance shorts included in the SurREEL Moves screening at the Hammer represent a particularly exciting “push forward into a new territory of work.”

Although it’s been a whirlwind nine years, Kessler insists, “I always get refreshed from looking at the work.” Come and be refreshed by Dance Camera West’s offerings this summer.

A Weekend at the Hammer Museum

Choreography in Media: A Panel Discussion