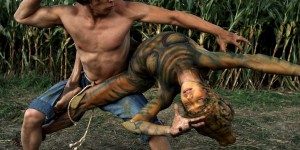 "Becoming" will premiere at the Dance Camera West Film Festival

Choreography meets cinematography at the Dance Camera West Film Festival, which kicks off at REDCAT tonight. In addition to hosting a party, DCW presents the world premiere of a Canadian film “Becoming,” along with eight other international short films totaling 73 minutes. In an elevator, on a conveyor belt, in a cornfield and other locales, romantic, poignant, surreal, and dramatic stories unfold through bodies in motion. The program on Friday, June 5, starts at 8 p.m. The extravaganza of dance on film, called “Screendance: A New Visual Language,” continues on Saturday, June 6, at 6 and 8 p.m. Each of the three programs this weekend offers a different lineup of films, 31 in all, from 14 countries, including the United States, Sweden, New Zealand, Switzerland, Finland, Cuba, and South Korea. Dance Camera West is based in LA, and this is its eighth year producing one of the world’s only festivals devoted to dance films.

Screenings and other events continue throughout the month. Visit www.dancecamerawest.com for details.