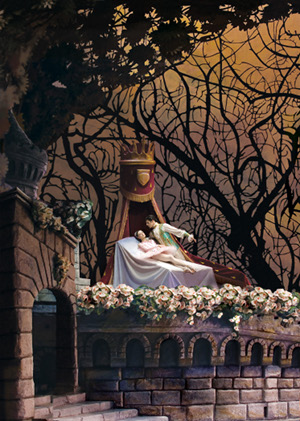 There have been many versions of The Sleeping Beauty since the original premiere at St. Petersburg’s Maryinsky Theatre in 1890, each with its own vision of how best to honor Marius Petipa’s legendary choreography, Pyotr Tchaikovsky’s masterful score and Ivan Vsevolozhsky’s groundbreaking direction. American Ballet Theatre has brought Beauty back in six different productions – the most recent reincarnation the result of executive decisions and choreographic additions by ABT Director Kevin McKenzie, 1970s prima ballerina Gelsey Kirkland, and dramaturge Michael Chernov. And since its 2007 premiere, this Beauty has been called “toddler-tailored,” “a mess,” and perhaps most damning of all, “Disney-esque,” by critics who know their Beauties.

But while the opening performance at the Dorothy Chandler Pavilion, as part of Glorya Kaufman Presents Dance at the Music Center July 15-18, confirmed many of their criticisms, neither jarring omissions nor garish costumes could keep me from springing to my feet, propelled by the exhilaration that glorious art brings, when Princess Aurora (Gillian Murphy) and Prince Désiré (Marcelo Gomes) took their bows.

Yes, the central struggle between good and evil loses potency where dancing that communicates one force or the other has been trimmed out of the production. When the evil fairy Carabosse (Nancy Raffa) exits in a pyrotechnic blast at the end of the Prologue, for example, the curtain falls almost immediately, but we need to see the benevolent Lilac Fairy (Michele Wiles) restore classical order, harmony and balance, even for just a few moments, to believe that goodness has prevailed, that she has indeed softened Carabosse’s curse, and Aurora will not die, but only sleep, from a prick of the finger. And yes, the trimming gets really out of hand in Act II, when Prince Désiré sails to Aurora’s castle, battles Carabosse, finds his sleeping princess and wakes her all in such a hurry that I actually miss the kiss. Harrumph.

But other directorial decisions work with Marcelo Gomes’ brilliant performance to bring us a more believable, more admirable and endearing Désiré than I’ve encountered elsewhere. Instead of a moody, melancholy youth, this Désiré cavorts with friends and flirts with a countess until the Lilac Fairy reveals to him a larger purpose he can serve and a truer, deeper kind of love he can know. In a vision sequence that features some of Petipa’s most exquisite choreography, the prince glimpses the gentle, forthright Aurora through scattering, shifting lines of fairies who keep her at a dream’s elusive distance. His speedy decision to marry her might raise some eyebrows, but when the vision fades, his dancing conveys such a determined and irrepressible desire to act on his love that we believe him. And the shy smiles that creep across his face while he leaps and jumps with calm, assured strength at his wedding celebration suggest that each tour is an outpouring of sincere joy.

Désiré’s world, the world Aurora finds when she wakes, is modeled on the court of Louis XIV – the birthplace of classical ballet. And while the original Sleeping Beauty looked to celebrate this time period and identify St. Petersburg with it, the enormous curling wigs, exaggerated shows of gentility, and coquettish scheming in ABT’s version seem to function as foils to Aurora’s direct, unadorned clarity, restraint and humility. Gillian Murphy’s remarkable performance draws the contrast in sharp relief, as her arabesques crystallize like a delicate frost and sweeping, turning ports de bras bloom with the gentle inevitability of silently bursting rosebuds. In the Grand Pas de Deux, we fall in love with the subtleties of her dancing: in her sissones, the delightful delay in her second leg and the precise care with which she draws that lagging foot into neat contact with the first; in her renversés, the way she wholly devotes her eyes and arms and heart to a particular bend and direction, while her leg floats around and carries her away in another.

Petipa’s choreography still has the power to make us fall in love with his ballerina, but somehow The Sleeping Beauty also makes us, with none of Murphy’s splendor to speak of, feel loved. When Aurora pricks her finger and falls asleep, all around her think she’s dead. They’ve been told this isn’t so, but when faced with the appearance of disaster they forget and despair. Ah, these are my people. But instead of giving up on them, the Lilac Fairy mercifully reminds them that she has saved the princess from that dismal fate. And with her back to us, she glides to and fro, fingers flowing and arms waving tenderly in a caress that comforts as they fall under her spell.