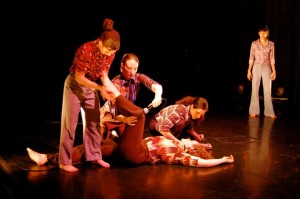 When Trisha Brown and her fellow dance rebels of the 1960s and ’70s began using movement “scores” – directions that require performers to solve problems in the moment of performance – in lieu of “set” choreography, the shift was both aesthetic and political. By redistributing the choreographer’s power of artistic decision to the dancers, scores encouraged audiences to see performers as thinking community members and to question the authority of the art establishment. In 2010, however, when the score is an established choreographic device and Brown represents, willy-nilly, the present dance establishment, it’s hard to imagine the revolutionary spirit this method once carried.

In Bricklayers With a Sense of Humor, performed this past Saturday at Highways Performance Space in Santa Monica, Arianne Hoffmann continues the work of this breakaway dance generation by challenging the authority of the now-conventional movement score, reinvigorating the form with political significance, and re-asserting the power and responsibility of the performer. Inside a series of scores that govern with varying degrees of control, Hoffmann and her fellow movers discover, struggle, delight, suffer, resist, obey, and rebel to thrilling and unsettling ends. While the most restrictive scores yield intriguing results – by giving the performers a clear force to push against – the success of even these sections depends on the movers’ individual decisions. The performers’ willingness to stretch or break out of each structure when necessary ensures both artistic interest and the well-being of the group.

From the very first score, the stakes are high and the problems are real. “It certainly is harder to breathe.” Hoffmann narrates her sensations from the bottom of an ever-growing pig pile, with understated humor and concern that builds with the number of bodies on her back. We chuckle nervously as she allows four movers to climb on before panic creeps into her voice: “I’m having trouble speaking, and it makes me think it’s too much … pressure.” The women immediately peel themselves off in response to her alarm, and our breathing deepens with hers.

Recalling Trisha Brown’s “line up” experiments, these bricklayers – in brown, red and powder blue polyester shirts tucked into high-waisted bell-bottoms – negotiate individual power as they seek to maintain their equidistant arrangement in a sideways-facing horizontal line. Steps taken by the women on the ends trigger a flurry of checking and correcting in the middle. But then Rebecca Pappas has had enough and holds her ground with a solid fist raised at Audrey Malone’s back. This resistance seems to fuel Malone’s fire, and she raises a fist to stop Angeline Shaka from invading her space. The battle of wills eventually rams them all into a heap against the wall … a much more glorious end than the initial calibrations suggested!

Tehya Baxter emerges from the wreckage, performing a regimented hand dance and parading through the space with clear paces and sharp quarter turns to the tubas and trumpets of the Ex-Post-Communist Community Brass and String Bands. Her focused, blank stare breaks now and then to flash us a wide, forced smile. Contrast this controlled march – disturbing in its lack of individual choice or expression – with Hoffmann’s sprawling solo danced with a microphone in her pants. This woman enjoys her personal freedoms.

At first it’s just a game: Ally Voye tries to stand her ground while Audrey Malone tries to push her over. But soon this score leads to the violation of individual freedoms and bodily rights. Malone’s efforts grow violent, and Voye’s pinched face and flailing arms betray real distress, until she collapses to the ground. Malone panics because this noncompliance keeps her from following the directions, and she yells at Voye’s lifeless body – trying insult, mockery, and coercion to get her up off the floor. When the others enter and conduct sound experiments on Voye’s insensible form, digging a microphone into her belly and manipulating her legs to produce muffled thumps, it’s awful to watch, and it looks like the decision to break from this score might fall to the audience. A performance has never brought me so close to taking action, and this might be the work’s greatest tribute to Hoffmann’s predecessors.