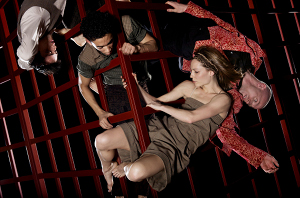 UCLA Live introduced New York’s Cedar Lake Contemporary Ballet to Los Angeles Friday night in Belgian choreographer Sidi Larbi Cherkaoui’s Orbo Novo (New World), and Saturday the company returned to Royce Hall in its final performance (for now) with works by Canadian Crystal Pite, Norway-based Jo Strømgren, and Dutch choreographer Didy Veldman. I caught Friday night’s show. Founded only seven years ago and directed for the past five by the French-born former Ailey dancer, Benoit-Swan Pouffer, Cedar Lake has quickly made a name for itself by building an impressive repertoire of works by renowned international choreographers and dancing them brilliantly. Thanks to UCLA Live, the company will return to LA for biannual performances and ongoing residency activities beginning in 2011.

“When you look at the brain, it’s obvious that the two hemispheres are separate.” Sitting side-by-side at the edge of the stage, two dancers explain left and right brain function with carefully measured words and calmly flowing gestures, all in perfect unison. Establishing a context for Orbo Novo, their words come from the book My Stroke of Insight, neuroscientist Jill Bolte Taylor’s account of the left brain stroke that altered her neurological functions for eight years. As the performers’ voices gradually pull apart, others join them on stage to relate Taylor’s experience of losing the sense of self, separateness from the world, and running inner monologue normally produced by the left brain. “And all that brain chatter went silent.”

In this silence a woman floats outside of time, following rolling impulses through belly, ribs, chest, shoulder, elbow, wrist, and long fingers that trail behind and seem to describe this New World in continuous, curving strokes. Voices interrupt the eloquent image with more of Taylor’s words: “The more time we spend choosing to run the deep inner-peace circuitry of our right brain hemispheres, the more peace we will project into the world…. Which will you choose?” Here the text begins to feel redundant and overbearing, but then Cherkaoui catches us up in a swirling orchestra of falling, rising, reaching limbs propelled by Szymon Brzoska’s rushing arpeggios, and I think we glimpse Taylor’s self-described “nirvana” in a language-less, self-less, sensory-rich world.

We catch echoes of Taylor’s story – a paralyzed arm that juts out awkwardly from Jason Kittelberger’s tumbles, tremors that wrack Golan Yosef’s body, euphoric energy that swells through the group – and we recognize in the isolation, limitation, joy, and striving, elements of our own experience. Alexander Dodge’s towering wall of red gridwork – shifting, porous, but ever-present – becomes the boundary that defines left and right, inside and outside, captivity and freedom, past and future. Still, the people here seem to exist in past and future, wearing high-necked blouses, ruffled dresses, sleek bodysuits, plaid vests, and long, shiny coats. And their superhuman maneuvers on, up and through Dodge’s divider make us question its power to divide and the categories it creates. But when a duet emerges far upstage, behind the grid, my limited, fragmented visual access makes the dancing feel like a memory I can’t quite recall, and I’m frustrated by the separation. And when the wall morphs into twin cages that threaten and then swallow Ebony Williams’ flinging, thrashing form, we see the futility and danger of resisting the binaries.

Despite the darkness, determinedly physical, courageously vulnerable dancing carries a strain of hope through the evening. Solos of miraculously continuous rolling – where legs fly over heads and shoulders and torsos defy gravity to snake and peel up off the floor without support – surface again and again, suggesting the power of disorientation to engender possibilities. The elements of Cherkaoui’s Orbo Novo combine and recombine to weave a dense web of associations, one that captivates and entangles his viewers, compelling us to make sense of Taylor’s experience and to question assumptions about our own.