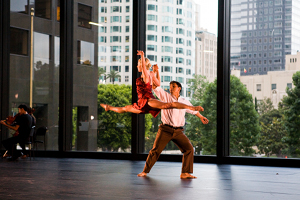 On July 22, City Ballet of Los Angeles performed the final installation of its three-week summer series, Concerto Project, against a magnificent backdrop. In front of a wall of windows in a cavernous loft space overlooking City National Plaza on South Flower Street, dancers sidled up next to office buildings gilded by the sun’s slanting rays and slid past the smooth façade of the public library – washed a warm golden beige in the fading daylight. It was a glorious setting for dance, and a fitting one for a company so devoted and connected to its city.

Founded by former American Ballet Theatre dancer and Los Angeles native Robyn Gardenhire as a school in 2000 and then as a professional company in 2003, City Ballet of Los Angeles has worked since its inception to become a dance institution of and for Los Angeles: offering training at low or no cost to children from the economically depressed Pico Union District, introducing ballet to thousands of elementary school students throughout LA, and developing a company that reflects the diversity of its city and brings ballet to new audiences.

Envisioned as a platform for the dancers’ choreography in the rich architectural environment of downtown LA, the Concerto Project series featured different works each week, and Thursday’s mixed bill included eight pieces in various stages of progress. While some rushed endings and not-quite-believable dramatic shifts pointed to areas for further development, captivating concepts, inventive movement, superior dancing, and the most racially diverse audience I’ve seen at a ballet concert all affirmed that LA needs its City Ballet.

Artistic Director Gardenhire’s “Salt” is a taut, restrained thriller (like Angelina Jolie’s new film?) that releases a fury of fiercely thrown limbs and then pulls back, tauntingly, at the height of the action – dancers strutting coolly and eyeing each other warily. Perris McCracken strikes through the space with charging chassés and biting lunges, torso at an aggressive forward pitch. Jessie Taylor joins her in a throwing, flicking face-off center stage, while Felicia Guzman, Genevieve Zander and Jin Cho build a circling, weaving, chasing counterpoint to their stationary standoff. I’m baffled when the dancers strip off their shirts at the end, but hopefully this piece is only a taste of more “Salt” to come, and maybe then all will become clear.

All is definitely not clear in CBLA dancer Mary Tarpley’s “Porcelain” – a love triangle that pulls me back and forth between confused and intrigued. Guzman and Zander are pushy, devoted sisters who dream about future love as they waltz wistfully in long tulle skirts. Zander’s prince shows up, but love’s not what she imagined, and being left out is definitely not what Guzman had in mind. Tarpley builds a funny, touching physical connection between the women, but it gets murky, or maybe just overly angsty, as Zander spends more time with Prince Juan Toledo-Espinoza and Guzman’s spirited dancing fades into vague reaching. The first and second sections feel disconnected, but the bond between the two women and the arresting partnering between Zander and Toledo-Espinoza clearly indicate an emerging choreographic talent.

Also promising is Rick Gonzales’ duet “Rabbit Hole,” where a shift in desire turns intense devotion to unwanted advances without warning. Here, Gonzales and McCracken join forces to let her fly and spin with superhuman height and speed, until she feels his assists as pushes and fights against them in dangerous collisions. Gonzales’ history with New York’s City Ballet surfaces in McCracken’s long-legged walks and contorted, bent-legged turns that look like Balanchine’s The Four Temperaments, and these angular elements keep the tension building. In the end, I can’t quite buy the drama because it doesn’t emerge convincingly from the dancers’ physicality, but I’m still looking forward to Gonzales’ next work.

And I’ll seek out every opportunity to be inspired by City Ballet’s dancers – like Taylor, who embodies the lingering strains of the cello in Gardenhire’s “La Vie Ante’rieure” with supremely satisfying musicality.