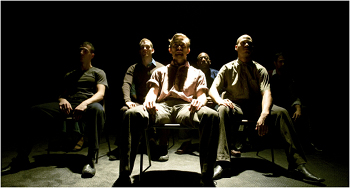 It is an art to let an audience forget about “dance” or “performance” and instead submerge it in a vision so thorough, so absolutely clear-sighted that town hall meeting, support group, feature film, and personal journal meld into each other onstage.  It is this art that makes DV8 Physical Theatre so much greater than the sum of its parts. At another West Coast premiere in Royce Hall, UCLA Live presented the English troupe and its latest work, “To Be Straight With You,” on Friday night.

Every word comes from interviews with 85 individuals conducted to create the piece. Sentimentality is left at the door for 80 minutes of movement, stories, facts, meticulous lighting and sound, and costumes as subtle as the DV8 craft itself. What remains is the raw nerve of cultural shame. Part of this is beyond native comprehension: There is a sense of post-colonial guilt, a confused responsibility that belongs uniquely to the English heritage. Men and women must flee to England for refuge from blind atrocities in Nigeria, or from families in India that will not accept homosexuality the way London will.

But “To Be Straight With You” does not work in generalities.  Instead, facts are acknowledged as the force of so many individuals’ suffering for their sexuality. The 85 countries lit in red beneath a dancer’s hands criminalize, to varying degrees, homosexual relations, and regional prejudices create the private narratives of each vignette. Two women are drawn – literally, by lighting on a scrim – farther and farther from each other as their culture denies them a relationship. An Iraqi doctor relates his devastating story in clinical tones, even as unidentifiable men batter and drag him across the stage. In a passage of the finest staging, classical Indian dancing to pop music helps ease the tragedy of suppression in arranged marriage. One woman revels in her newfound freedom from stringent religion.

For every moment of heart-wrenching fact, there is a moment of physical mastery. The DV8 dancers have precision command over every sinew. Some of the most effective monologues are delivered from bodies seemingly possessed, with shaking legs or expressing every single word in an arm, an elbow, a neck. In one awe-striking blink, two men sitting in chairs become two men standing on chairs.

With chairs and scrims and moving sets, the stagecraft in “To Be Straight With You” is integrated so that one might overlook its complexity. Lights find their subject to the thread; sound obeys staging completely. Projection, the bane of graceful tech in dance, seems prepared as its own exhibit. It is a startling complement to what it accompanies. A mobile room becomes DJ booth, living room, or prison cell, and there is a chalkboard on the stage filled with scrawl, the chaos of a world that has thousands of words to describe its own fear of, well, deviation.

The glue of the piece is the tone of Lloyd Newson. When he established DV8 and his artistic directorship in 1986, Newson cast aside the pursuit of abstraction in dance. What results is so closely integrated with its performance and production elements, from monologue to follow spot, that the company truly embodies its “Physical Theatre” moniker.  Best of all, there remain the unconventional – or, as with masks, hyperconventional – signatures of the troupe behind “Strange Fish” and “The Cost of Living.”  It is direction so well-developed that performance disappears altogether, allowing us to observe our own.

DV8 Physical Theatre will present “To Be Straight With You” again on Saturday, Nov. 7, at 8 p.m. in Royce Hall at UCLA.