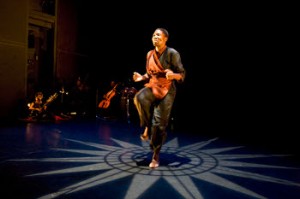 The latest dance installation at REDCAT through Oct. 25, called “Beautiful Me,” may seem intimidating. Gregory Maqoma and Vuyani Dance Theatre hale from South Africa, and this evening-length piece – on its first U.S. tour – encompasses both Maqoma himself and his national, cultural history. Maqoma has collaborated with choreographers from around the globe: Vincent Mantose from South Africa, Akram Khan from the U.K., and Faustin Linyekula from the Democratic Republic of Congo. The live accompaniment includes violin, cello, percussion, and sitar. From within a whirlwind of cultural resources and history, Maqoma and his musicians create an intimate and heartfelt performance that educates and all but embraces its audience.

Maqoma commands his stage resources: a square spotlight, musicians visibly entranced, and what must be a miked floor. He quickly mesmerizes the audience. As he slowly reaches the front of the stage, he blows a hole through the fourth wall and, in doing so, adopts the audience itself as part of the stagecraft for “Beautiful Me”: emissions from sighing to laughter to affirmative outbursts color and shade the remainder of the piece.

This is not to underrate Maqoma’s nuances as a dancer. Khatak and African fusion lend to him their sublime physicality, and dance and music are, admirably, indivisible. As if this weren’t enough, what finally sets “Beautiful Me” apart from performative autobiographies at large is its self-awareness. Rather than simply implying or embodying the influences on his work, Maqoma discusses them – and to a perfect degree. Mantose, Khan, Linyekula, the heritage of South Africa, and that of Maqoma himself are addressed directly. Contributions are laid out for the audience before being embodied in moments powerful and concise.

There are times less concise, and certainly less powerful, when “Beautiful Me” succumbs to self-indulgence. This would be par for the course in a one-man (and four-musician) show, but because the rest of the piece is so articulate, so involving, divergent solos are particularly off-putting, as they lose site of the creative arc.

Eventually, Maqoma remembers what he was doing before, and the piece picks up out of its lag. Its conclusion is as stunning as its introduction, giving the impression that a round or two of editing may give “Beautiful Me” a perfect pitch. Indeed, the musicians have already reached it in their performance, constantly responding to and commanding the performance without detracting from the mover. It is a delight to have an ensemble such as this one touring, bringing a unique dynamic to each venue. REDCAT is one venue particularly well-suited to “Beautiful Me,” maintaining both the untouchable art of performance and a sense of intimacy for the viewer. Maqoma’s words and his movements are clear; the music is resonant. The audience is in a place both for awe and for learning.

The learning Maqoma presents from his own process encourages the viewer’s, sometimes out loud: Without history, Maqoma asks, “How do we know where we come from? How do we confront ourselves, each other?” The knowing exposition makes the product all the more understandable, yet never dulls its intricacies – and Maqoma has made an intricate piece. He proclaims: “The past is not dead!” Neither is the present.