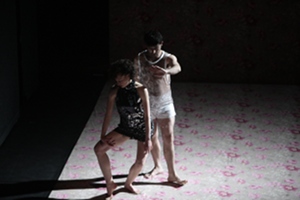 Based on John Jasperse’s track record of innovation and influence in contemporary dance, and based on the title of his latest work, Truth, Revised Histories, Wishful Thinking, and Flat-out Lies, I expected great things of the West Coast premiere at REDCAT on April 14. Truth purports to address the processes and results of belief by examining performance conventions that seek to create illusion or reveal reality – the kind of ambitious, relevant, and admirable undertaking one hopes for from such an artist. While its collaged scenes are generally clever, often laugh-out-loud funny, and sometimes compelling, however, the show doesn’t quite add up to a satisfyingly meaty or messy investigation of this pressing, complex question. But, then, dissatisfaction may be an intended response. Truth is elusive, after all.

Act I plays mostly with the light, sexy, cool, and absurd, dipping into various performance traditions (vaudeville, porn, ballet, music videos) to present ever-shifting personas for Jasperse’s four performers. Erin Cornell and Eleanor Hullihan – vampy divas in charcoal sequins, red lipstick and bobbed hair – exude cool power as they twist and unfurl, calmly circling and slicing white legs through black space. In shiny, see-through tanks, the guys (Neal Beasley and Kayvon Pourazar) seem intentionally overshadowed by the femmes fatales, and their separate and secondary position through much of Truth recalls a problematic historical perspective and its result: discomfort with men in dance and their quite literal supporting role in classical ballet. When the women take center stage, Beasley and Pourazar crawl into their negative space, bizarrely nuzzling and supporting the starlets’ hands and behinds as they dance.

Jasperse inserts himself into the action now and then – first as a hopelessly uptight student of the pirouette whose frustration and microanalysis inevitably topple his wobbly turns. When a voice from the audience layers criticism over Jasperse’s own, I consider which perspective I tend to trust. Later on, I suspect that the creepy black figure lying against the back curtain might be the choreographer again, and when he springs to his feet and removes his dark mask with triumphant flourish, or performs pathetic vanishing acts with a persistently visible ball, we adore his efforts to dazzle us and his unwavering belief in his own success. His characters’ earnest energy and sincere emotion provide a much-needed element of humanity, as the other dancers reveal to us no consistent, knowable selves. Switching between drastically different performance states with detachment, they indulge in trance-like, modern dance noodling to pings and bings in Hahn Rowe’s score one minute, and offer their mostly naked bodies for sexual consumption with Ginuwine’s invitation to “ride it, my pony” the next.

At the close of Act I, I’m ready to see the aloof dabbles in all kinds of artifice intensify or expand to a vigorous, personal, urgent probing of the issues at hand. But it’s not my piece, and Act II definitely doesn’t deliver urgency, although it does offer live musical performance by members of the International Contemporary Ensemble. The second half strips away most of the theatricality, color, antics, humor, and action to reveal …very little. The bareness, whiteness, stillness, emptiness is just a new kind of mask, and truth seems no more in reach. Or maybe this is the sadly depleted, withered, sterile sort of understanding we’re left with if we work reductively toward truth. Or maybe I’m trying harder to make sense of the stillness and silence and strangeness and endless noodling than I ought. Maybe the work just doesn’t reach the depths I’d hoped it would.

Performances by the John Jasperse Company continue at REDCAT Friday and Saturday, April 16 and 17, at 8:30 p.m. and Sunday at 3 p.m. Tickets are $20-$25 general admission, with discounts for students and those associated with CalArts. They may be purchased online, or by calling the REDCAT box office at (213) 237-2800.