Dance Review: Lil Buck in ‘What Moves You’ at the Broad Stage 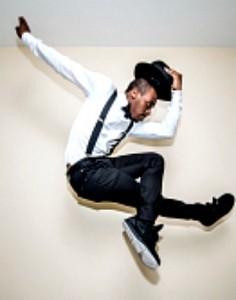 A few years back, a Memphis, Tenn., youngster named Charles Riley picked up on the street dance craze exploding through his neighborhood. A mixture of quick footwork, a rippling torso and sinuous arms, “jookin” has gone far beyond its Volunteer State roots. Now, this young man is one of the more prominent exponents of the genre. Riley has taken on the moniker “Lil Buck” and has been sharing his take on the style with audiences across the globe and online. He’s collaborated with Yo-Yo Ma, Wynton Marsalis, Madonna, Mikhail Baryshnikov and filmmaker Spike Jonze, among others. And he’s been featured in ads for a plethora of products.

This past weekend, he brought his agile, surprising and flashing body to the Eli and Edythe Broad Stage in Santa Monica for two shows. Collaborating with young award-winning cellist Mihai Marica, they titled their hour-long production “What Moves You.” The two young men described the event from the stage as a journey through their lives — up and down, quick and slow, quiet and loud — all told through their interplay of music and movement.

Marica played an assortment of short pieces by composers ranging from Bach and Britten to Gaspar Cassado, Gyorgy Ligeti and contemporary classicists Olafur Arnalds and Yevgeniy Sharlat. Lil Buck put his personal stamp on what these sounds meant to him. Showing his at times contortion-like responses to these aural cues, his arms undulated or circled, framed or decorated his upper body. His hips and feet turned in and out as he glided from one side of the stage to the other. Dressed in a black sweatshirt, black pants and black sneakers with white soles, he grabbed a microphone between dances to talk to the audience or with his colleague. A relaxed personality, he and the musician chatted about their interaction and how each was feeding the other in their respective milieus. The Romanian Marica was an equal partner and a riveting stand-alone artist.

The short dances were visualizations of the music, and the audience appreciated the dancer’s physical dexterity. His body was luxuriously indulgent, yet punctuated with lighting-fast toe/heel, leg and footwork. Occasionally, one lower limb would reach away from his center, or he’d lie back and arch his spine, but these moments were few and far between. A rhythmic regularity in the timing made the final works less exciting to witness and, for a couple of his offerings, fellow jookin artist Ron “Prime Tyme” Myles joined Buck on the stage. Unfortunately, this didn’t increase the power or the variation in the vocabulary.

Having studied a bit of ballet in the 14 years since he began jookin, Lil Buck’s carriage was upright and expansive and there were even balletic turns (in back attitude) amidst his seamless array of steps, tilts, tiptoe and side-of-the-ankle balances.

The young dancer now calls Los Angeles home. It would be great if he would share his artistry with us locals often as he continues to mature.