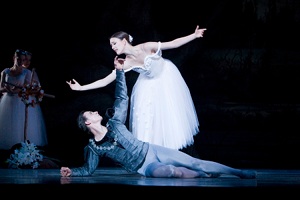 The oldest surviving Romantic ballet and one of the most popular ballets of all time, “Giselle” (1841) was the very first “ballet blanc,” featuring the corps of women in long white tutus which has become the symbol of classical ballet.

As Giselle, Alyssa Bross’ first act presents a beautiful, happy girl in the blush of first love.  Her piquant footwork and stylish ports des bras paint her character as confident, even flirtatious. Only when Giselle’s mother — played by Co-artistic Director Colleen Neary — expresses grave concerns for the girl’s frail health, do we notice something amiss. Bross seems to pale before our eyes, presaging the tragedy to come.  Her “mad scene” and death are touchingly effective.

Bross is partnered by Christopher Revels as Albrecht. Both of these young artists debuted with LAB a scant six months ago, as leads in the company’s annual “Nutcracker.” Partnered again for March performances of Balanchine’s “Raymonda Variations,“ the two have established an easy rapport, their complementary styles and personalities creating wonderful onstage chemistry.

In his first “story” ballet, Revels could not be more ideal for the role.  His extreme youth — he is 19 years old — and ebullient personality create an Albrecht whose only sin is his infatuation with a beautiful and charming peasant girl.  Physically, Revels is tall and handsome, with admirable stamina and enormous strength in his lifts. His calling card is his jump — the sheer height and hang time take one’s breath away. When he performs the multiple entrechats-six — Albrecht’s signature move — there is a collective intake of breath out in the audience, followed by an eruption of applause and cheers.

In the second act, Bross’ childlike joy is transformed to transcendent compassion. Made weightless by her own perfect bourrees and Revels’ effortless lifts, Bross’ ghostly Giselle seems made of mist as her undying love rescues Albrecht from the Wilis’ wrath.

Having dazzled an appreciative audience with her virtuoso performance in the March production of “Raymonda Variations,” Kate Highstrete offers an icy, implacable Myrta, Queen of the Wilis.  Etched by her long, slender limbs, Highstrete’s arabesque penche — the most enduring leitmotif of the ballet — gives this vampire-like creature a majestic beauty.  Founding LAB dancer Kelly Ann Sloan and recent arrival Molly Flippen bring a spectral buoyancy, a filigree line, and their own gorgeous deep arabesques to the Queen’s attendants, Moyna and Zulma.

Giselle’s jealous village suitor, Hilarion — whose discovery of Albrecht’s disguise precipitates the girl’s tragic death — is all smoldering intensity in the masterful interpretation of Chehon Wespi-Tschopp.  This charismatic dancer drives the drama in the first act; his spectacular leaps and turns in Act II make his death scene riveting.

The first act bravura Peasant Pas de Deux was danced by LAB debut artist Allyne Noelle, alternating as Myrta, and second-season leading dancer Zheng Hua Li. Noelle’s technical brilliance and bright exuberance in this dance contrast with her grave imperiousness as the Queen of the Wilis.  Li is the quintessential danseur noble, combining physical beauty and regal bearing with exceptional grace, purity of line, impeccable leaps and turns, and great strength in the lifts.  Meant to alternate as Albrecht, in this performance his painful landings of pitch-perfect jetes and double tours en l’air revealed the serious injury that has sidelined him for the rest of the run.

Replacing Li as Albrecht is returning guest artist Kenta Shimizu, who flew in from Japan last Wednesday to partner Chelsea Paige Johnston as Giselle.  Having performed the role numerous times, Shimizu delivers a fully realized interpretation, infusing the considerable technical challenges with dramatic depth and nuance. Named “One of 25 to Watch” by Dance Magazine, he is a consummate artist, currently enjoying a blossoming international career.

Dancing her first lead for the company, Johnston’s characterization of Giselle proves that she is more than capable of carrying a full-length work on her slender shoulders.  Appearing slight and fragile, Johnston certainly suggests the vulnerable young peasant girl of Act I; but she absolutely embodies the otherworldly spirit she becomes after her death, returning from the grave to dance in the moonlight. Her perfect balance, ravishing extensions, and graceful arms and hands perfectly suit the unforgiving 19th-century style. Johnston’s incandescent portrayal makes her Giselle feel inevitable and unique. In their final scene, Johnston and Shimizu are heart-stopping in their virtuosic delicacy.

Also notable in the second cast are Grace McLoughlin with Christopher Revels in the Peasant Pas de Deux. An audience favorite, McLoughlin danced Effie in “La Sylphide” two years ago, before her dazzling breakout performance in Balanchine’s “Kammermusik” in season four, and her radiant Rose in the “Nutcracker” Waltz of the Flowers last December.

The strong dancing and acting in all the principal roles reveal the excellence of Christensen’s detailed coaching.  But it is the female corps in Act II, breathtakingly perfect, that leaves the lasting impression.  The immaculate portrayal of the Wilis in the work’s signature image — the rows of women in perfect symmetry, not a limb out of place, hopping forward in arabesque — is the crowning moment of the evening’s magic.  Here is the real proof of this company’s excellence: a group of dancers so disciplined and filled with the spirit of the work.  LAB’s “Giselle” showcases the emergence of a world-class company, currently at the top of its game.