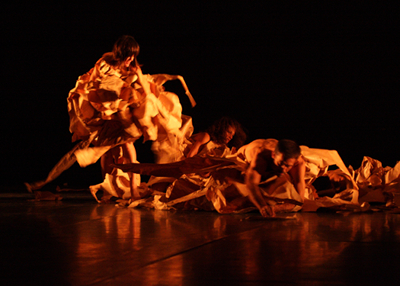 “Parades & changes, replays” is low-tech.  It is also very, very colorful.  If you’ve studied postmodern art, music, or dance, it’s best that you head to REDCAT for one of the performances this week.

When Anna Halprin first presented the piece in 1965, then “Parades and Changes,” it made quite a stir: nudity was a novelty, and the kitschy knick-knackery of modern consumerism was a recent addition to the formal arts.  There was also the matter of formation.  Collaborative workshops with artists across the disciplines made a new choreographic process, one that Halprin says “enabled us to add or subtract new activities depending on the culture of the times and the cost of performers.”  The result was named a “score,” an outline for filling in dances one performance at a time.

The score is old hat now, a process adopted into many, if not most, new modern dances from the college classroom to the stage.  Anne Collod has adapted this particular score for revival.  Her studies in pedagogy and dance history, re-creation and revival are remarkable program notes.  She and seven other creative notables (five dancers, two musicians) take the stage, not to mention the rest of the venue and the street outside, with an attitude both composed and entirely aware of the project’s intent.  After their initial vocalizations from seats in the house, it’s almost impossible to infer any emotions from the dancers at all.  Clothes are shed and put back on, and a variety of “is-this-art?” implications come out in movement, attitude, and production value.  The walls emit eerie strains of electronic musical score; a man in black visibly provides rolls of paper, or a lit white balloon, or a rainbow of small platforms to the dancers on stage.

The effect is twofold.  In one sense, it is preservation of a dance, something to show what made audiences tick 40-odd years ago.  In quite another, it attempts a stomping foot, a declaration that postmodernism is not dead.  I’m not entirely convinced.  The simple act of parading and changing on a stage littered with consumer oddities doesn’t do for the 21st-century audience what it did in the 1960s.

Nevertheless, it still effectively cuts out the middleman of virtuosity, the implicit need for bodily expressiveness to involve a ballet background.  “Parades & changes, replays” is an icon of an era and a reminder that, perhaps, that era might have generated a new kind of art to consider.  This revival may not be “Parades and Changes,” and it may not pack the punch of the original, but the meta-cultural study is a valuable one, and an invaluable addition to the recent repertoire around Los Angeles.

“Parades & changes, replays” will be performed at REDCAT through Nov. 14.  Performances begin at 8:30 p.m. Visit www.redcat.org.