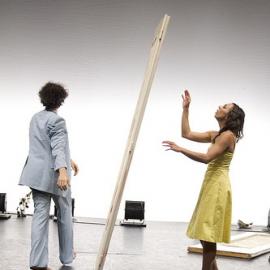 Every aspect of Tecnologia Filosofica’s Friday night performance felt surreal, from the venue – Theatre Raymond Kabbaz, which is attached to Le Lycée Français de Los Angeles – to the absence of English and the musical presence of a duo that resembled a tacky Las Vegas nightclub act. It was as if the price of admission bought you a ticket to another country. Flashing with European artistic sensibilities, “Canzoni del Secondo Piano” left many (Americans) in the audience amused and mystified. One thing was (pretty) clear: The quirky, nonlinear performance highlighted the happenings on the second floor of an apartment complex.

For more than one hour, Turin, Italy’s Tecnologia Filosofica accented the ordinary, making the particularities of living in cramped quarters relatable to all who have experienced it. Without words, the two female and three male dancers conveyed what it is like to flirt and socialize with, bump into, and feel crowded by neighbors, but also, in the midst of it all, feel totally alone. Welcome to the ups and downs of apartment dwelling.

Many of the show’s scenes were odd — perhaps because the irony was French and Italian, as were the songs accompanying each piece, and Americans aren’t always on the same humor page. Yet that didn’t stop the audience from thoroughly enjoying the kookiness on stage. One female, Francesca Cinalli, swung an apple on a string, trying to take a bite. She wore a yellow dress from which her nipple often poked out. Another woman, Elena Valente, clamped a celery stalk between her lips. Both ladies seemed to be longing for love, and not getting it from any of the males, who were engaged in what looked like a friendly game of Twister. When one of the male dancers, a playboy-ish Renato Cravero, finally took notice, he and the celery stalk-ing woman joined together, entangled in an absurd display of lovemaking.

Even more bizarre were the singer, Francesca Brizzolara, dressed in fishnets, black knee-high boots, a miniskirt, and a leopard-print coat with two rollers in her disheveled hair, and the musician, Paolo de Santis, a tad more flashy with black leather pants, a black-and-white-print button-down, and a cheesy mustache. The two seemed plucked right out of a dive bar in any down-on-its-luck town, making funny faces and even sillier gestures to the crowd and into a video camera in front of them. She sang in French and Italian, while he tickled computer keys and played a kazoo.

The most precious part about “Canzoni del Secondo Piano” was how unprecious it was. The piece celebrated average bodies and everyday senses of rhythm. Some people like to move. Some are really good at it. These dancers did not perform anything amazing or near impossible. Instead, they had fun playing with beats and moving in unconventional ways. That makes them dancers. For Americans, who have become used to viewing spectacles and feats of grandeur, it’s refreshing to see people making a dance out of everyday life.