Dance/Theater Review: ‘In Plain Sight’ at the Bootleg Theater 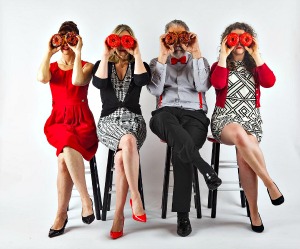 Art, music and dance are often used in therapeutic settings to help patients overcome psychological difficulties. But choreographers/writers/performers Ally Voye and Carmela Hermann Dietrich took it a step further in creating and presenting their hour-long dance/theater work “In Plain Sight” at the Bootleg Theater this past weekend. With collaborating performers Bill Ratner and Leah Rothman, the four seemingly normal adults serio-comically revealed the peculiar responses they have to some of life’s challenging situations. Supported by an empathetic pre-recorded sound score by Tom Moose (mostly melodic electric and acoustic guitar with some soft percussion), the audience was able to see some of what goes on for these folks behind and in front of closed doors.

Stepping into the theater, patrons found a brightly colored doughnut “smiling” at them from the seats. Without any warning, we had been silently invited to share a “sugar day” with Dietrich (a translucent connection to not drinking alone?). This sometimes-anxious artist/mom deals with worries about her young son by consuming as many nectarous concoctions as possible. Wordlessly offered these tempting confections, we then voraciously gobbled up each delicacy before the show formally began. No need to wait for instructions.

What followed was a series of portraits of four characters and their eccentricities. We learned what may have caused these hyperbolic reactions and potentially drew a personal connection to what was being divulged on stage: Dietrich’s sweet tooth — her way of dealing with parental insecurities; Voye’s self-destructive reach for perfection — her punishing commitment to her own ideas of excellence; Ratner’s superstitious counting while executing daily tasks — his peculiar bookkeeping ritual begun during a period of childhood grief; and Rothman’s coordinated fashion choices — a panacea to her stresses as the mother of children with special needs.

Before breaking into this quartet of solos, the group played with the pastries and with rhythmic pursed-lip breathing. Taut and disquieting. After changing the spatial arrangements of the cakes and of the lineup of players, we were then served a text-driven panoply of individual histories. Gestures abounded, but Ratner’s physical battle with an unseen opponent opened the space for unspecified, yet engaging, interpretations. This viewer’s most emotional response occurred when Rothman and Dietrich discussed the former’s matching nail, underwear and purse colors. Demonstrated by the latter woman’s onstage re-dressing into a costume matching Rothman’s thigh-length black dress with white striped yoke and hemline, red belt, red high heels (all performers’ costume choices credited to Rothman), the tragic poignancy and its apparent normalcy — clean lines, bold colors, classically flattering attire — resonated in a spot-on view of middle-class life.

Disappointingly, much of the movement only illustrated the text being delivered. Drawn from interviews and videotapes of the participants, this body language added some embellishment to the script, but it didn’t deepen this observer’s understanding of any of the characters’ plights. It demonstrated the behavior, but didn’t elaborate or abstract what we knew. A dance for the performers and rolling metal clothes racks enlivened the space, but the action didn’t seem to affect the characters or the narrative or give this onlooker any deeper understanding of these archetypes.

The dancing and speaking were well organized and clearly articulated. All the t’s were crossed and the i’s dotted, details were well thought out and intricately crafted, but the nice tidy package seemed to be missing a full-bodied vibrancy. Maybe all the precise and exact language prevented this witness from a fuller relationship to the material. The near commonplaceness of these idiosyncrasies seemed to beg for some kind of theatrical magnification, something less controlled or exaggerated to happen. Do these people want to stop what they’re doing? Perhaps that’s not the scope of what this work is about. Maybe this is just the first of a multi-step process. One day at a time.

For information about upcoming shows at the Bootleg Theater, visit http://www.bootlegtheater.org.