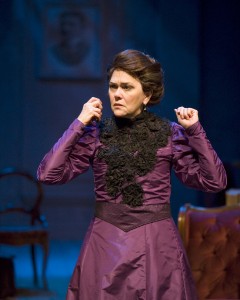 Meet the coal miner’s daughter who’s the leading lady in “Ghosts” at A Noise Within.

Hard day at the office: Deborah Strang has acted in more than 40 productions in her 17 years as a resident artist at A Noise Within, the only classical repertory company in Southern California. She’s appeared in countless TV shows and films – in roles as diverse as a Vulcan in “Deep Space Nine,” a detective in “The X-Files,” and a mother in “Eagle Eye.” That doesn’t mean her job has gotten any easier. “I never approach a role without thinking there’s no way I’m going to be able to do it this time,” she says, sitting in the front row of the Glendale theater on a recent weekday afternoon.

Current challenge: In her latest incarnation, Strang plays Mrs. Alving in Henrik Ibsen’s “Ghosts,” on stage at A Noise Within through May 9. When the artistic directors, Julia Rodriguez-Elliott and Geoff Elliot, asked her to take on the role of the widow with an ailing son, Strang admits she was hesitant. “I was trying to find ways to get out of it actually,” she says with a laugh. “I wanted an easier path.” Part of the reason the play is so difficult is that “Ibsen walks a very thin line between realism and naturalism and melodrama,” Strang says. “It’s nonstop, it’s that heightened emotional state, it’s talk talk talk talk talk, and just figuring out how do you make that palpable to our modern-day ears?”

No spoiler alert necessary: Written by the Norwegian playwright in 1881, “Ghosts” was considered shocking and scandalous when it was staged the following year. Without giving away the plot, let’s just say infidelity, venereal disease, incest, and death all play a part in this intense drama, but it’s ultimately a universal story. “What our director Michael [Murray] wanted it to be about,” Strang says, “was a debate … between two ways of living: living an authentic, true life where you’re following your soul and your heart or living a life where you’re just living the dictates of religion or government or the people who have power over you, like a husband in her case, or your parents. That’s what this woman is teetering in between: what she knows to be right and what has been instilled in her all of her life.”

Mrs. Alving in “Ghosts”: “We’re haunted by the ghosts of our mothers and fathers – and by all kinds of old, dead ideas and dead beliefs that are piled up inside us.” In many of his plays, Ibsen created strong female characters trapped by Victorian traditions, perhaps influenced by his mother-in-law, Magdalene Thoreson, a leader of the feminist movement in Norway. 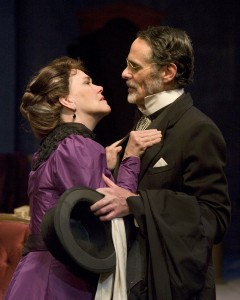 From shocks to sparks: Strang’s boyfriend and fellow resident artist, Joel Swetow, plays the role of Pastor Manders. “You always kind of fall in love with your leading man,” Strang says, “so how fun can it be to fall in love with the man you’ve already been in love with for 26 years. It’s like having a little honeymoon or something. It’s opening up all those love channels and you don’t have to repress it at all. It’s great and I think — I may be wrong — but I think we’re pretty hot together onstage.”

The place Strang calls “home”: Founded in 1991, A Noise Within is one of the few companies in the nation dedicated to classical drama. It presents works in the repertory tradition and has won 26 Los Angeles Drama Critics Circle Awards. Strang has been there practically from the beginning (she missed the first season when three plays were produced).

Surprise favorite: When Strang read Alfred Jerry’s absurd and surreal 1896 play, “Ubu Roi,” she let the artistic directors know she did not want to be in it. Naturally, she was cast as Ma Ubu in the 2006 production. When Director Rodriguez-Elliott mentioned in the first rehearsal that she wanted to start the play off with Ma and Pa Ubu sitting on toilets, Strang said, “Oh no, I’m not gonna sit on a toilet. I just don’t even want to go there.” It turned out, she says, she had the best time of her life doing that play. “Once you sit on a toilet in front of an audience full of people, you are free to do anything. I was up in the audience sitting on people, I was singing on top of a piano. It was so freeing and so much fun to do and I had no idea.”

On the tube: Despite the numerous TV shows she’s worked on, including most recently “Cold Case,” “Close to Home,” and “Numb3rs,” Strang has yet to be cast as a series regular. “I don’t expect it to happen now. I mean you never know, a ‘Golden Girls’ might come along or something like that,” jokes the middle-aged actress. She currently has a recurring voiceover on “The Spectacular Spider-Man” as Aunt May, a job she got through one of A Noise Within’s subscribers who wrote and produced the animated series.

Coal miner’s daughter: Strang begins her explanation of how a coal miner’s daughter from Appalachia, Virginia, became a stage and screen actress in LA by mentioning the woman who recently caused an international sensation on “Britain’s Got Talent,” the overseas version of “American Idol.” “Have you seen Susan Boyle… the woman who’s on YouTube everywhere now? The poor little woman who just sang her heart out? You’ve got to look at that video. It’s very, very moving.
“You know, there are just a whole lot of people all over the world that have these kinds of dreams and they’re in the middle of nowhere, and sometimes they fall through the door that leads them on the route to their dreams and sometimes they don’t. I think I just fell through the door. It wasn’t through anything that I necessarily made happen. I always pursued my bliss.”

Opening doors: Strang went to a small liberal arts college in her native state to study social work. “I wanted to follow John Kennedy’s ‘Ask what you can do for your country,’ I wanted to join the Peace Corps. … I ended up auditioning for plays and followed that bliss.” She graduated with a BFA from Emory & Henry College and went on to get an MFA in Dramatic Art from the University of North Carolina at Chapel Hill. Once in LA, she went to Santa Monica College and UCLA to pursue a doctorate – but not in theater. “I wanted a Ph.D. in biology, but to go into the environmental world because I was bored with film and television. … But at the same time, this was developing more and more and I didn’t get recycling coordinator at Universal Studios, I got Olga in ‘Three Sisters.’”

Not too many people can say this: “I think I’m probably happier than just about anybody else I know,” Strang says. Following your bliss “is what the play’s about, whether or not we follow what we feel we want or what we ought to do. I do think I’ve generally done what I’ve wanted to do.”

“Ghosts” continues through May 9 in repertory with Shakespeare’s “The Taming of the Shrew” (through May 17) and Jean Anouilh’s “The Rehearsal” (through May 24). Remaining dates are: