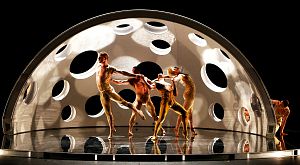 Our very own global dance ambassador, the internationally acclaimed DIAVOLO/Architecture in Motion, is bringing the Los Angeles Philharmonic-generated North American premiere of “L’Espace du Temps” to the Valley Performing Arts Center on the campus of Cal State University, Northridge (CSUN) this Saturday, Sept. 19, at 8 p.m. and Sunday, Sept. 20, at 3 p.m.

The program consists of three separate pieces developed around abstract set designs that motivate, inspire and encapsulate daredevil dancing. The orchestral accompaniment is performed by the New West Symphony, led by Los Angeles (and Wild Up) conductor Christopher Rountree. The scores have been composed by the world-renowned Esa-Pekka Salonen, John Adams and Philip Glass and were originally performed by the LA Phil. Each of the three music/dance collaborations premiered on its own (2007-13) at venues including the Hollywood Bowl and the Ford Amphitheatre. This complete trilogy of unique work has yet to be presented in one evening on one stage on this continent.

DIAVOLO, under the direction of French-born Jacques Heim, has been touring the globe since the company’s early days, 23 years ago. Its process is quite extraordinary, and the resulting one-of-a-kind creations are tremendously engaging on visceral levels (“Wow! They jumped off from way up there!”), the spectacle of each event is mind-blowing (“What is that huge thing that everyone is climbing around, on top of and through?”) and the rigor and fearlessness of the performers are jaw-dropping. Keep in mind, Heim has also choreographed for Cirque du Soleil.

The way it works? The collaborating artists, designers, directors and technicians devise a piece of architecture on a grand scale and put it together, testing it for its relationship to the human element. Then, the movers explore this aberrant environment in order to evoke a non-narrative world of risk-taking, community trust and visual explosiveness. The set pieces for this production are designed by Tina Trefethen and architect Adam Davis. The live music composed by some of this century’s more highly acclaimed innovators adds excitement, aural drama, tension and release to the always-changing stage scenes.

This writer saw this company perform in the early 2000s where the dancers moved on, around and under the surface of a huge bowl. As this structure tilted, the performers had to navigate a new verticality, had to fine tune their timing so no one got hurt as they jumped, rolled and leapt around, and had to execute their assignments so that an abstract story could be told.

Valley Performing Arts Center is located on the campus of California State University, Northridge (CSUN), 18111 Nordhoff St., Northridge 91330-8448, at the corner of Nordhoff and Lindley. Tickets range from $60 to $99 and can be purchased by visiting ValleyPerformingArtsCenter.org or calling (818) 677-3000. For more info, visit  http://www.valleyperformingartscenter.org/calendar/diavolo-architecture-in-motion-l-espace-du-temps/view/2015-09-19.