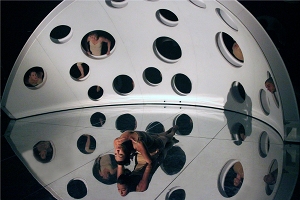 Since I’m not much of a dance aficionado, I don’t usually write dance reviews. In fact, I find myself declining more often than accepting when invitations to see dance or ballet come my way. But Diavolo is another story. Maybe that’s because they transgress the boundaries of what traditionalists would call dance; but on a more basic level, it’s simply because they are so much fun to watch.

Diavolo has been on the LA cultural scene since 1992, when Jacques Heim, a native of France and graduate of CalArts, put together his first troupe in Northridge. From the outset, Heim’s idea was to explore how dance and movement could be fused with architecture and mechanical systems, two interests that have long captured his imagination. He sees himself more as “an architect of motion” than a choreographer. Earlier works like Trajectoire became the model for the Diavolo method: choreograph the dance to take place in, on and around a large, geometric structure, one that can rock or pivot, or split apart and be recombined. The physical height of these objects often puts dancers far above the ground, where they frequently launch themselves into space, to be caught by other dancers. With Diavolo, the acrobatics matter as much as the dance.

Fluid Infinities, set to the music of Philip Glass, is the last of a trilogy of works commissioned by the Los Angeles Philharmonic. Collectively known as L’Espace du Temps, the trio also comprises Foreign Bodies (2007, music by Esa-Pekka Salonen) and Fearful Symmetries (2010, music by John Adams). The collaboration required a different way of working than Heim was used to. Instead of conceiving the dance and then finding music that would work with the concept, the music came first and provided the framework upon which the dance could be built. “In some ways,” Heim told attendees of a Fluid Infinities preview, “it is artistically useful to have to adhere to a pre-established framework.  You know in advance where you have to begin and end certain movements and it provides a kind of road map for where things are going.”

For Fluid Infinities, Heim’s team of designers and craftsmen built two structures: A long sectioned tube wrapped in clear acrylic, and a curved, pivoting canopy riddled with holes, which is positioned upon a large circular mirror. Upon first glance, the canopy looks like the asteroid-pocked surface of a barren planet in space. According to Heim, it could be this, but it could also represent inner space — the brain. The reflective surface not only implies the process of quiet thinking, but also mirrors the dancers’ actions, creating some striking imagery. Of course, this being modern art, the viewer is free to apply his or her own interpretations; maybe it’s my naughty mind, but I couldn’t help but see human “seeds” launched out of the phallic tube, who then swarmed over and eventually got sucked into the “ovum.” The ultimate act of creativity.

But I probably do Mr. Heim a disservice with such carnal musings. His vision is typically more intellectual and draws upon many influences. A glimpse inside his notebooks for Fluid Infinities reveals influences ranging from 17th-century geometry studies of Descartes to imagery from early 20th-century French cinema. His use of actors, athletes and gymnasts, as well as dancers, creates a different and exciting feel to his productions. Not surprisingly, Cirque de Soleil tapped Heim to produce one of its popular entertainments in Las Vegas, the show known as Ka.

By now, Diavolo has become a well-established company. They have toured extensively in Europe, Asia and Latin America and have had 13 U.S. tours. In 2007, they were officially recognized as a cultural treasure by the City of Los Angeles. If you haven’t seen Diavolo, Fluid Infinities is one of their best, most fully realized productions so far. The symbolic power of the structures used here makes them seem less like props or gimmicks and more like an integral part of a fully realized concept that underpins the entire production. The 10 dancers are captivating to watch not only for their sinuous movements, but also for the surprising moves and perfect teamwork they display. In short, this is the kind of dance that almost everyone can enjoy without knowing anything about Dance.

Fluid Infinities gets its world premiere on Thursday, Sept. 5, at 8 p.m. at the Hollywood Bowl in a program called Music by Glass – Dance by Diavolo, featuring the Los Angeles Philharmonic Orchestra conducted by Bramwell Tovey performing Symphony No. 3 composed by Philip Glass. For more information, call the box office at  (323) 850-2000 or visit www.hollywoodbowl.com.